With 33 countries under my belt, I’ve experienced some of the most amazing cities that the world has to offer. From great beaches, climate, friendly people, personal interests, world-famous attractions, architecture, history, and culture, there are many different factors that make a city great, let alone top ten!

San Diego’s sheer diversity makes it a perfect vacation for any age. Balboa Park offers a collection of the world’s finest in one place; and no matter how young or old you are, the San Diego Zoo, the Safari Park, and Sea World are magical experiences. If it’s adventure you’re after, Skydive San Diego is sure to please. Other family-oriented destinations aim their focus almost entirely on the children, whereas San Diego’s attractions have double appeal.  Simply put, San Diego has attractions that offer the most to both child and adult. My childhood dreams became a reality while visiting San Diego.

urban cultural park. In Balboa Park, we found a 1,200 acre park with an outdoor concert area, fountain, the San Diego Zoo, tennis courts, an arboretum, koi and goldfish ponds, several museums including the Museum of Man, dog parks, events and festivals, and more.

Balboa Park is the crown jewel of San Diego. This enormous greenbelt, in the middle of the city, is the community’s gathering place. We, unknowingly, arrived at Balboa Park on December Nights, the nation’s premier holiday festival. Participating Balboa Park museums opened their doors free of charge and more than 300,000 visitors experienced the joy of San Diego’s largest free community festival.

During our journey through the park, we experienced a first-class play at the renowned Old Globe Theatre, observed the works of master artists at the San Diego Museum of Art and the Museum of Photographic Arts, saluted local sports heroes at the Hall of Champions, gained some knowledge at the Museum of Natural History, and took in the beautifully landscaped open space. It was a truly multicultural experience, where we enjoyed food, music, and entertainment from around the world. With the hot temperatures of southern California, the only thing missing from Balboa Park is a place to cool off, but its prime location in the heart of the city allows for easy beach and water access.

Just look at the world around you
Right here on the ocean floor
Such wonderful things surround you
What more is you lookin’ for?
With unparalleled up-close sea-life encounters, a variety of shows, and thrilling rides SeaWorld, San Diego brought me back to childhood and showed me what I was lookin’ for. By petting and feeding the dolphins, swimming with the beluga whales, and celebrating life underneath the sea through splashy spectaculars featuring killer whales, pilot whales, and dolphins, we dove into the exhilarating life under the sea.

Our early morning dolphin encounter set the stage for a magical day at SeaWorld. We were

brought poolside to curious and playful bottlenose dolphins to enjoy an up-close-and-personal experience. It is only during designated times throughout the day that this dolphin encounter is actually possible so I was grateful for reading the Insider Tips beforehand. For only $6, our trainer-guided encounter allowed us to touch and feed dolphins for almost five minutes. We instantly became part of the SeaWorld environment.

Beluga whales are the gentle giants of the sea and I had the opportunity of a lifetime to interact with these beautiful creatures during the Beluga Interaction Program. These attentive animals played and interacted with their surroundings and us, seeming almost more timid than I felt. It was a little unnerving standing next to such large mammals, but they were so docile and playful, I quickly learned to relax and enjoy the unique experience. They were like little children. They loved to play, they loved attention, and they loved to be pet and rubbed. They spun in place, floated on their backs, gave kisses on the cheek, waved, and made a variety of noises, depending on the hand signal. With only eight slots per beluga session, it was an intimate experience that I will not soon forget. Few places in the world offer such an up-close, unique interaction with these animals.

The Shamu show, One Ocean was a big splash! The energy and spirit of the ocean was enveloped in a multi-sensory celebration of the sea. Majestic killer whales joined us on a journey into a world that drenched our senses, and our clothes, in the rhythm of the ocean. Watching their playful nature and graceful movements reminded me of an ice skater. At any moment, a twirl, leap, spin, or jump could happen with complete control and fluidity. Their elegance was truly unfathomable considering their massive size, yet anything was possible. My limited adult imagination diminished with each splash of water. I became a child who believed in the breathtaking grace of flying whales.

SeaWorld is one of the most popular marine-life parks in the world and it is only minutes from the most famous zoo in the world.

Famous as the only zoo on the west coast to have Chinese Pandas, San Diego Zoo is the

premier zoo in the US. This lushly landscaped facility is what all zoos in the world measure up to. We wore our most comfortable shoes as we prepared ourselves for the several miles of walking while visiting the zoo. Some of my favorite exhibits were: Elephant Odyssey, Panda Canyon, and Africa Rocks, but with more than 4,000 creatures residing at this celebrated zoo, the choices were endless. Many rare species reside at the zoo, other than the pandas, including Buerger’s tree kangaroos of New Guinea, long-billed kiwis from New Zealand, wild Przewalski’s horses from Mongolia, lowland gorillas from Africa, and giant tortoises from the Galapagos. The zoo is also an accredited botanical garden, lavished with more than 1 million plants on its 1,900 acres. From cuddly critters to creepy crawlies, this world-famous zoo had it all.

The San Diego Wild Animal Park is not a zoo full of caged animals. They allow animals to run freely on simulated habitats that mimic the animal’s natural settings. Here, we saw some of Africa’s most beloved animals including lions, elephants, and cheetahs roaming free – well relatively. The African Tram Safari allowed us to relax on a guided tour of the African plains while connecting with the wildlife on a closer level.

Africa has a dizzying mix of habitats, animals, and cultures, and the Africa Tram Safari tour

gave us a glimpse of this amazing diversity. Our guide filled us in on the animals at the park and pointed out particular individuals and interesting behaviors. All of my favorites were there including herds of curious giraffes, massive rhinos, graceful gazelles, and impressively horned antelope. 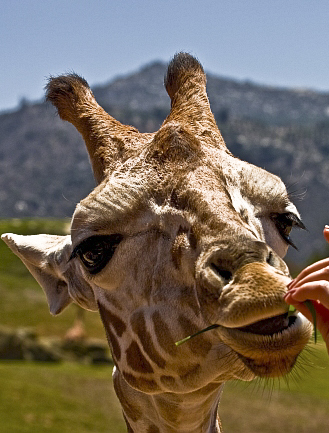 Freefalling for approximately 1 minute, gave me another taste of adventure that I never thought existed and I got it at Skydive San Diego. My instructor deployed the parachute at about 5,000 feet, and I enjoyed a 6 minute parachute flight over Southern California’s stunning scenery. Landing softly in our grassy drop zone, I remembered why skydiving had hooked me in the first place.

The feeling of the free fall before the parachute is opened is something beyond comparability. While looking out the window during the plane ride, it became blatantly obvious that I was about to partake in something completely unnatural.

Before I processed what was actually happening, I was out of the plane and in the air. I was too busy smiling and breathing and keeping my eyes wide open to really realize I was falling, but I was. I was falling at 120 mph and it was like a dream. But not like the scary dreams where you’re falling and you think you’re going to crash. It was more like a peaceful falling and with my instructor strapped to my back; I felt a false sense of safety. I saw water and mountains for miles and I was laughing internally. The out-of-body experience while free-falling seemed to last a lifetime. It was beautiful. I was beautiful. I could conquer the world.

The 6 minute journey back to the ground was surreal and I breathed a breath that was fresh and new. I was hooked. As we soared to the ground with a large red and white wing above our heads, I took in the stunning scenery that is southern California. A joy that I didn’t know existed took place as we turned and glided through the sky with the parachute open. Free falling was only part of the journey.

There are so many unbelievable opportunities in San Diego that I could go on for hours.

Limiting myself to just a few adventures seemed impossible. I’ve left out things like the downtown baseball field, the Gaslamp District, Coronado, Legoland, La Jolla, and dinner cruises because San Diego is like a whole country in itself. Finding a place in my top ten cities was easy because it could easily fit into the top ten favorite countries category.