While in Aruba, I discovered a new sport that combines everything I love about sports. 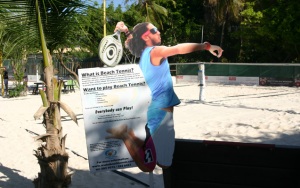 Take the fun and fast-paced sport of tennis, add a volleyball court, and a sunny beach setting, and you have the new, exciting sport called beach tennis. It’s like tennis except its played on a regulation beach volleyball court. Two to four players on each team volley back and forth without letting the ball bounce. One hit per team is all that is allowed and points are scored when the ball is hit outside the lines or touches the ground. Beach tennis is played with specially designed paddles and de-pressurized tennis balls that make it easier to keep a rally going. After twenty minutes of instruction, I was ready to test my skills in a match and after two hours, I wanted to add “play beach tennis regularly” to my bucket list. I think I found my new favorite sport.

At MooMba beach, we took a two-hour beach tennis lesson from Bertrand Coulet. Starting out with basic instructions, we advanced to rallying the ball back and forth twenty times in succession before starting a two-on-two game. I was exhausted after the first ten minutes and broke a sweat before we even started rallying; it’s definitely a great workout.

My partner, Chris, and I worked well together and we even won a few matches.

But he was equally exhausted after each match and we needed several intermissions during the two-hours. While he was almost passed out on the bench, I thought it was the opportune time to take a few photos.

We met our match when we played against Shelly and Samantha though. They may have beaten us every set, but we still had fun and enjoyed the challenge. (No need to get cocky girls; it was all in fun.)

Although the net is higher than regular tennis, I still managed to serve well a few times and I was proud of my first-time effort.

We recently moved to a new community in North Carolina and our neighbors are very sports-oriented. I’m thinking an introduction to beach tennis is in order. Maybe I can convince someone to put a net in their backyard so we can all play regularly. That could be an item for next year’s list.