What creepy, crawly things do you fear? Is it massive, hairy tarantulas? Maybe lizard-looking creatures with long, blue tongues that slither? Or fat, constricting snakes that coil around your body? My hair is rising just thinking about it. But this weekend at Alisal Guest Ranch & Resort I had to suck it up and show Athena that there’s nothing to fear. I couldn’t, after all, impose my irrational apprehensions on her.

While at Alisal Guest Ranch this weekend, we were given a unique opportunity to hold, touch, and learn about a few critters that we’d normally shy away from. After our Hay Wagon Ride to the Old Adobe, we returned to the barn area and were greeted by a staff member setting up a few small fences for “critters.” She had birds, a boa snake, two types of lizards, and a Blue Tongued Skink.

Normally I’m someone who faces fear head on but put me near any creep crawlers and I can’t even stand still. Athena hasn’t developed that fear of anything that crawls so when she wanted to explore the possibilities a little more, I didn’t want to show my true colors.

Everything that I touched or held, so did she. So… I had to touch and hold them all. 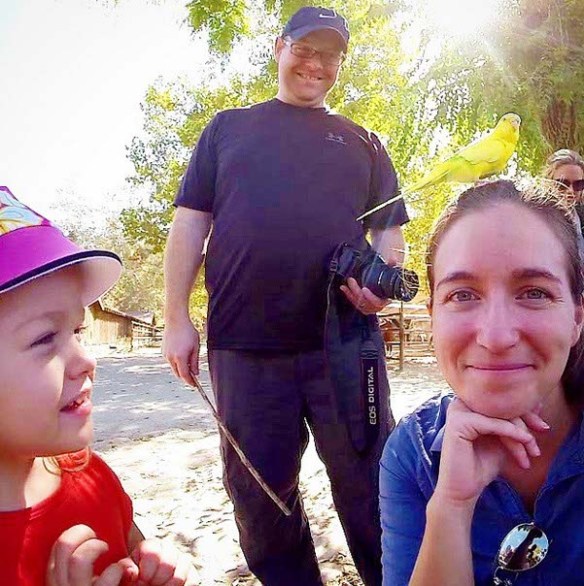 When we were walking back to the room, though, and noticed a massive tarantula stealthily crawling across the street, that’s where I drew the line. Forget it!

I’m fully aware that tarantulas are some of the least aggressive and dangerous spiders around, but those legs aren’t getting anywhere near me.

I was able to set my fears aside and give my daughter an opportunity that most don’t experience. She’s turning into a fearless little lady and visiting places like Alisal Guest Ranch allow us to learn and grow from unfamiliar things.

Would you have done the same even if it was something you feared?

You can watch a video of our full trip here:

29 thoughts on “Don’t Put that Thing on Me! Critters at Alisal Guest Ranch”