Coming home to New Brunswick is just as much a food event as a trip to visit family and friends. We start planning our food stops before we’re even on the plane. Pastelli holds a special place in my heart since it’s where Darren and I had our first date and Pump House is a tried and true favorite as well. I miss chicken from Swiss Chalet, pizza from Boston Pizza, and poutine and donair from anywhere and everywhere I can get them. There are so many delicious, mouth-watering options that I struggle with finding the time to enjoy them all.

The Taste This! food tour packs in several of my favorite downtown stops on a three hour excursion so I gave it a try as soon as I arrived. I enjoyed samplings from two of my favorites, Pastelli and Pump House, and learned of two new options, Tide & Boar and Windjammer, that I’d never experienced before. I learned a lot from the guide even though I lived here before and the group was a lot of fun. I’d highly recommend it for locals and tourists. 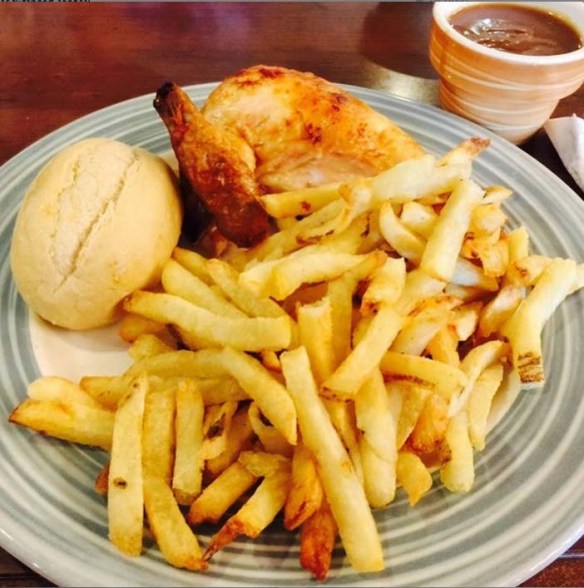 Swiss Chalet doesn’t sound like the name of a restaurant. It sounds like a hotel or maybe at best a ski resort. While I don’t think they have the name right, they certainly know good chicken and delicious gravy. I dream about that juicy chicken even after I just finished eating it. Admittedly, I’ve gone three times since I’ve been home and I order the same Quarter Chicken Dinner with gravy every time.

The only place I’ve gone to more is Boston Pizza. Their pizza choices are never ending and every combination is equally fantastic. On August 10th they celebrated their 50th anniversary and offered $5 individual pizzas. My entire family dined there and we each ordered a different pizza. My two favorites were Spicy Perogy, an inspired combination of sour cream, smoky bacon and Boston Pizza’s Cactus Cut Potatoes with pizza mozzarella and cheddar, topped with green onion and a generous dollop of sour cream, and BBQ Chicken, tender chicken breast tossed in sweet and smoky BBQ sauce and baked with pizza sauce, fresh mushrooms, pizza mozzarella and cheddar. I also, on another occasion, tried their Pepperoni and Bacon Pizzaburger which is a half-pound prime rib beef burger wrapped in a pepperoni pizza. It’s stuffed with bacon, pizza mozzarella and pizza sauce, topped with even more pepperoni and pizza mozzarella, then baked to perfection. When I saw it on the menu, I couldn’t pass it up. I didn’t like it as much as their pizza, but if you’re hungry, it would definitely fill you up. I’m almost glad Boston Pizza isn’t in California. I don’t think I’d be able to resist it.

I know my list hasn’t included very much healthy food, but that’s not going to change here either. I could live on donair and poutine… if I didn’t gain weight or if it wouldn’t kill me. From the time I wake up in the morning until I go to sleep at night, I think about eating it. Why oh why can’t you get curds in the US? And don’t even get me started on the US version of donair. There are a few places that make poutine just a little bit better than others like Deluxe and the best donair I’ve had is from Freddie’s Pizza in Moncton but I’m not picky. As long as it’s actual curds for the poutine and “real” donair sauce for the donair, I’m good to go.

Today, I tried a Mexican place called Guacamole for the first time. I ordered a Burrito Bowl and it was enough for lunch and dinner. While I only tried it once, it has easily found a spot in my favorite places to eat in Moncton area.

When I visit New Brunswick, I’m  not going to win any healthy eating awards and I have to hit the gym for a couple months to make up for it when I return to the US, but it’s worth every calorie and every bite. Do you have a favorite food in eastern Canada? Is there something from your home that you long for when you’re away? My list continues to grow.