After a 13 hour flight to Beijing and another 6 hour flight to Phuket, I worried that Athena would be a nightmare to be around today. Actually, if I’m being completely honest, I worried that I would be a nightmare to be around today and then I’d have to deal with a cranky child on top of that. Once again, Athena has shocked me with her positive attitude and ability to cope with long flights and changing time zones. Today was our first day at Renaissance Phuket, Thailand and it was magical. We walked on the beach, swam in our own private pool and the resort pools, played at the kids club and tasted Thai food. It’s only the first day and we’re jet-legged, but I’m already in love with Renaissance Phuket.

We arrived at Renaissance Phuket at 2:30 am. Too excited and over-tired to sleep, we ate bananas, oranges, apples and pears from the welcome fruit tray. I was grateful when I walked into the villa and saw snacks and drinks provided complimentary. It was a late arrival and no restaurants were open. We ate with the villa doors open and our feet dipped into the pool. It was like being in a movie. I never thought I’d actually experience such luxury myself.

We woke up at 7:00 am and went for a swim in our pool before breakfast. Athena can swim now so she stayed in longer while I relaxed in the pool chair next to the pool. She’s at such a fun age. She still needs Mommy’s help but she’s independent enough to play on her own. She learned to swim a few months ago and it changed everything. Gone are the days of sitting on the pool stairs for hours without being able to swim and play comfortably in the pool. Now, we race, dive, jump and “canyon ball” into the pool like two children rather than an adult and a child.

After breakfast, we went for a walk on the beach. I was pleasantly surprised that we were the only ones there. We didn’t swim. Instead, we just walked and played in the sand. Athena practiced her handstands and cartwheels and I couldn’t avoid participating. Sand found its way into my hair, my clothes and my finger nails but it was worth seeing the smile on Athena’s face.

We made our way back to the resort and found the kids club. It has three rooms with movies, games, books and toys. During the day, there are free activities and crafts for kids. Athena made a bracelet and we read several books. Between the kids club and the kiddie pool, we could have stayed in that area all day. The pool has a water slide and a waterfall and three different depths for swimming. We played mermaid games and enjoyed the pool until I was too wrinkly to stand it. Athena would never get out unless I asked her. We love that she’s a fish. It’s one of the major reasons we want to live in California.

The sun already set before we had dinner at Loca Vore. I ordered the rice, chicken and pineapple dish and I’m still licking my lips. I might even order it again before we leave. I enjoy trying new dishes but when I find something as delicious as this, it’s hard to move on. 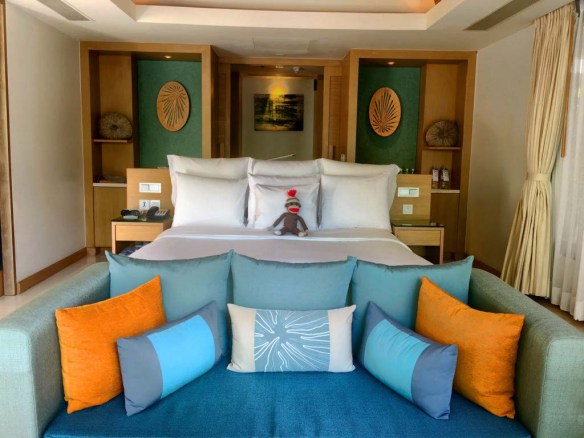 We’re back at our villa at it’s already 9:00 pm. It didn’t rain all day but the sky is alive with lightening right now. Surrounded by windows, we’re comfortably in bed watching the night show. I’ve been dreaming about visiting Thailand for over a decade. We want to leave the property and explore as much of the area as possible, but we’re here until early December so another day at the resort won’t hurt. Sometimes it’s nice to relax and enjoy the moment.

23 thoughts on “Our First Day at Renaissance Phuket”