I had dreamt of a European vacation a thousand times and every time it was the same. The weather would be warm, which is just the way I like it. I figured it would be at least 35° Celsius every day. After all, it is never cold in Europe right? The hotels and hostels 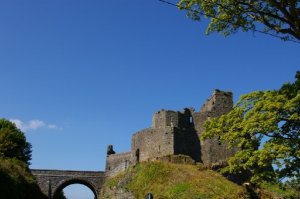 would be cheap and I would meet lots of exciting travelers that would help me along on my journey. That was the way it was in every movie that I watched and every book that I read so I figured that at least one of them must be right. The bathrooms would be clean and the showers would be hot. The transportation would be quick and reliable. I would be able to travel everywhere by train because I knew everything there was to know about Eurorail. I had researched it for several hours and I knew all of the hidden perks. My romanticized version of the trip was much better than the real-life, unplanned version. Even before I set foot outside of the airport in uncharted territory, I ran into several big snags.

My husband and I arrived in London after a six hour over night flight. The flight left at 11:30pm, which I thought was a great idea. I planned to sleep on the way and then I would wake up fresh and ready for my first day. Let me tell you, that was my first mistake! I was so anxious when I first got on the flight that sleeping was the last thing on my mind. It was like I took one too many uppers and I was ready to fly with or without the plane. By the time I finally settled in and thought about sleeping, it was time for the first meal. It was rare to get a meal on a plane and I will eat just about anything so I figured go for it. I put down my tray and I waited to be served. It took about one hour to get my food, eat, drink and get everything cleaned up. So, I was back in the same situation again. I was not ready for sleep, but this time there was a movie about to start. I surprisingly forgot my earphones and had to pay $2 for them on the plane. It seemed like a small price to pay to be able to watch the movie, relax, and maybe get some sleep.

Not even five minutes after the movie ended, there was an announcement that another meal was going to be served. I was a little confused because I had never been given two free meals on a flight before, but I was more than happy to eat all of the free food that I could get. After all, I was on vacation. I put my tray down for the second time and this meal was better than the last. Then, the next movie was about to begin.

I am not sure if you’ve ever tried to sleep on an airplane when the attendants are serving food, a movie is playing, children are crying, and adults are snoring, but it can be sort of difficult. I was able to get at least 20 minutes of sleep out of six hours before we finally arrived in London.  Things were not going as planned.

I worked the day before and the 24-hours of no sleep were playing on me. I was in no mood to deal with any confrontational situations.

Don’t even talk to me right now. Hurry up and get off the plane.

I hoped my husband was not half as tired as I was. I just wanted him to pass me my bag and look in the opposite direction. I realize that should not have been my first reaction, but I really didn’t care. We walked off the plane and I stretched my legs. I think the anticipation of it all was still the driving factor in my ability to make it through the long lines of customs.

While we were waiting in the line, we heard the London accent from one of the customs agents. I normally love to hear the different accents, but at this point her voice sounded loud, shrill, and a little like a dying cat. I closed my eyes for a second and thought, “I am in London. This is amazing. Forget about the crazy customs lady and think about what a great day you’re going to have.”

We proceeded through the lines and I quickly realized that the annoying customs lady was going to be the one to process our arrival. We walked up to the counter together and laid our bags on the floor. I think she was tying to impress a new, young agent-in-training because she was rude in all of her actions. Even the way she rested her fat arm on the counter irritated me.

Her first words were, “What is the purpose of your stay in England?”

“How long are you here for?”  she said with a voice even more piercing than before.

“So, you don’t even know how long your vacation is?”  she hissed. “When is your return flight?”

My husband spoke up, “Eleven weeks! We are in Europe for eleven weeks. We’ll be traveling to different countries while we’re here. We’re just in London for a few nights.” He attempted to match her unchangeable attitude.

His answer must have been sufficient because she went in a different direction with the questions. I was starting to feel like we were being interrogated by the police as she rambled on.

“Where are you staying while you are in London?” she said.

We both haphazardly attempted to tell her that we didn’t have a place booked and we were just backpackers. We were going to leave the airport and look for a place to stay. She was completely appalled with our ignorance as she proceeded to tell us that it was the peak tourist season.

“Why would you arrive in London during the busiest time of the year and not have a place booked in advance?” How much money do you have at your disposal?” she asked.

“I’m not quite sure what the right answer is. I can’t seem to get this right.” I honestly wasn’t trying to be smart; I just felt defeated.

She continued glaring at me with her eyebrows raised.

I felt like saying, “What is a good friggin’ answer for you? What would make you let us continue on with our day?”

Again, the answer must have been sufficient because she finally stamped our passports and let us through the gates.

All of London awaited us… as soon as we found our bags, figured out how to get out of the airport, found transportation, and made our way downtown.

If you have fantasies about flying over night and arriving in a new country fresh and prepared for the day, you must be young and naive. Our ill-prepared journey began with a tired and irritated couple who had no place to stay and no idea how to get where we wanted to go.

8 thoughts on “The Arrival – European Tour”