Last February, my wife and I went to the Galapagos Islands – incredibly beautiful islands 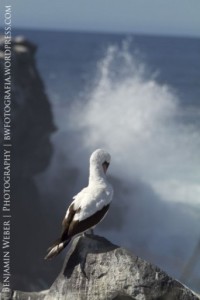 off the coast of Ecuador. The Galapagos Islands are an archipelago on which have evolved a fantastic range of different species of marine, avian and land animals independently from the mainland of South America – species which you can find in no other place on Earth. The journey was something of dream for me because of the whole history of the islands, particularly with Darwin’s theory of evolution clicking into place after his studies of the wildlife on the islands. The journey itself was so much more incredible than my dreams even allowed me to imagine.

It certainly is not the easiest of places to get to – even coming from São Paulo in Brazil, where one might think it is close: a sleep over in Lima… then a night in Quito before getting an early flight to the islands. Quite tiring if you can’t spend longer in these cities. However, it was well and truly worth it.

It wasn’t just the way the place was teeming with wildlife – and really, there was so much wildlife it was unbelievable. It was the way the whole, unique, ecosystems have developed over thousands of years in isolation on the separate islands, in spite of recent human interference, with fantastic diversity of land and marine iguanas, flamingos, hawks; nazca, red and blue footed boobies (a brilliant dive-fishing birds, with rather funky mating rituals) and their chicks, nesting right on the very paths we were walking along; giant tortoises ambling to and thro; Darwin’s finches… sea lions, sea turtles, various types of shark, other beautiful fish… and this is just for starters. Though we hear about the diversity, it is incredible to see how each island differed to the other in terms of the flora and fauna, and how the

Everything nature could do was right in front of our eyes within touching distance – at its harshest, with us being able to see boobies effectively discarding their weakest, second born chick; birds getting into a strop over territory… and at its sweetest, with schools of sea-lion cubs playing in the shallow water; iguanas all huddling together in efforts to maintain body temperature; and then the mating rituals of the Galapagos hawks: seeing the male hawk effectively dive bombing the female to gain affections – all within a few feet of us. Animals so completely unafraid of humans, in spite of all the damage that we had done to the islands since we came across them a few hundred years by killing off species and introducing our own pets and agricultural animals.

Being on the islands lets you truly see the struggle between raw, beautiful and wild nature and human influence; the tragedy of the actions of our ancestors on the islands, and the hope that the islands have amidst growing human settlements on the islands. The first island where we landed, Baltra, looked to be deserted – the island’s wildlife had been decimated after years of human influence with the most recent destruction coming from the US Air force base constructed, and the pets people had introduced to the island which then proceeded to attack the native iguanas which were defenseless against such intruders. On the island of Santa Cruz, close to Baltra, we saw a descendant of one of these animals in the shape of a wild cat. It looked at us for a minute or so from a safe distance and trotted away. A number of the giant tortoise sub-species have also been made extinct due to human influence – pirates and sailors who found the islands and found the tortoises to be an excellent and easy source of meat.

At the same time, however, we could also see close how on some islands, all the best efforts of human colonization had been defeated by the harsh environments – with the lack of water on many of them, and the arid conditions, settlers were not able to successfully adapt to them and were, as time progressed, effectively driven away. One such signs of nature’s victory is Post Office bay, where a few remains of old bunkers remain, and a broken down old post office which had been established. No human inhabitants left.

Whilst there are a number of small human towns on the islands which bring their own respective problems for the wildlife with the industry that come with them – and indeed, us tourists – it is great to see how there are controls trying to limit the damage caused, and there are programs to increase the numbers of species which had been diminished, as well as eradicate the alien species. Witnessing the efforts at first hand, and seeing what exactly these efforts are in aid of, is, however, an incredible and inspirational experience.

Read more from this author at: www.360extremes.com

57 thoughts on “The Galapagos: Nature at its Most Raw and Beautiful”