At 140.6 miles, the Ironman Triathlon is known for its grueling length, hard race conditions, and outstanding athletes. It is recognized

world-wide as one of the most difficult competitions in existence, yet I’ve recently learned about a competition that makes even the Ironman look doable. La Ruta Maya Belize River Challenge is an excruciatingly demanding multi-day race traveling a perilous river route across the country of Belize. The route runs West to East along the Macal and Belize Rivers in the foothills of the Maya Mountains. Although it is a race for everyone, not just professional racers, the 170 miles of river racing is the epitome of sportsmanship and athleticism. This year, on March 9th-12th, Shane Perrin, along with the support and sponsorship of Pau Hana Surf Supply, was the first person to complete the La Ruta Maya Belize River Challenge on a paddleboard. Completing the four-day, 170 mile course with class 2-3 rapids, Shane is an inspiration to Bucket List Publications and all that we symbolize.

The toughest part of Shane’s journey was the day he arrived. The Pau Hana guys took him to a river with class 2-3 rapids for his first lesson. Shane said, “I have been on class 2-3 before in a canoe, but never on a board. Nick troutman (world champion kayaker) gave me a 5 minute brief on what to do. My first run I bit it. I fell weird off the board and my right leg came down first in the water and hit a rock. I sprained the back of my leg pretty bad.” It wasn’t enough to discourage him though; he even did 2 more runs on the rapid that day, but he was sore and strained for the next two days.

Day One of the race arrived with its own challenges. Shane only had 5 weeks to train

for a race that he would normally prepare for in 2 or 3 months. Then, the 14′ crossfit that he was supposed to paddle didn’t arrive so he ended up on a 12’6″ board for the entire first day. “Not knowing the river was tough,” he said. “I didn’t know when I would get water or supplies from the crew so I had to ration myself most days.” Fighting a knotted back and extensive alone time, the mental game wore him down. “I didn’t bring any music so I spent 7-8 hours a day in my mind.”

Even with the challenges that he faced, Shane found the time to connect with the locals. On day one, he met a local maned Paula. She waited each day for him to come in and she cheered his arrival. She gave him a guardian angel to wear and on the last day, she gave him a hug and introduced her youngest son. Shane took him out on the board for a short paddle and introduced him to a new adventure. “It was pretty cool to connect with the locals on a sport they had never seen,” he said. At checkpoints, when he met up with the crew, he loved talking to the local kids. He’d pull up and get off the board. The Pau Hana crew would fill his camelbak and he’d tell them what food he needed. Then, he’d be back on the board and paddling in usually under 10 minutes. Finding the time and energy to interact with local children during his short breaks truly demonstrates his character.

Each day was progressively more difficult. “The whole expedition was go, go, go. Very little down time,” he said. He went out and raced 50 miles and give it everything he had only to eat, relax, sleep, and do it all over again the next day AND two more days after that. With everything tight and sore, he experienced post race body torture each morning, but he continued. He never gave up or even considered it. 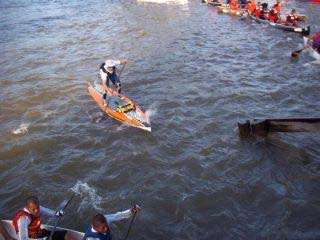 Despite the tough conditions and excessive distance, he finished 25th in the Male Division, and 62nd overall, in 26 hours 50 minutes and four seconds, ahead of nine other canoes!

It’s only a few days after returning from La Ruta Maya Belize River Challenge, but Shane is already working out the logistics for the Texas Water Safari, a 260 mile race that traverses 3 rivers. Shane’s passion for adventure and his courage to tackle new, thrilling challenges is exhilarating. He increasingly motivates me to seek out my next bucket list adventure.

38 thoughts on “Shane Perrin – An Inspiration to Bucket List Publications”