In a land of limitless possibilities, it almost makes it difficult to plan events. When I found 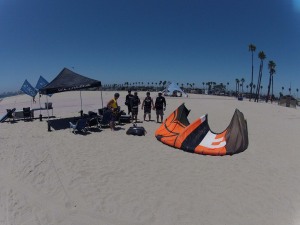 out that Darren’s brother was coming to stay with us for 10 days, I wanted to organize the best activities that southern California has to offer, but where to start? What things did Darren and I like the most? What new events would we like to try? What would quench Kev’s thirst for sun, sand, and outdoors? Choices, choices, choices. The line up included a glider lesson with Soaring Academy, kiteboarding with SoCal Kiteboarding, surfing with Banzai Surf School, and a trip to Sea World. Each activity offered something new and exciting, but kiteboarding was the one activity that Kev wanted to try the most. Living in the mountains of Banff National Park, Canada, he was hoping to take the skills that he learned from kiteboarding on water and apply them to the snowy slopes of  British Columbia and Alberta; his lesson with SoCal Kites certainly didn’t disappoint!

He arrived at SoCal Kites early for his lesson with aspirations of gaining as much valuable information as possible while asking questions that pertain to using kites on the snow.  Bart, the owner, and Nick and Darren, both instructors, immediately began answering his questions and showing their excitement in Kev’s tended application of the sport. 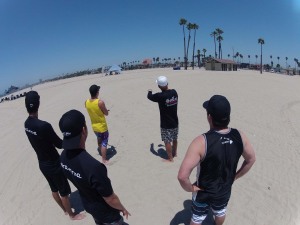 When the other students arrived, he was please to find that the student/instructor ratio was 1:1. It was made clear from the start of the lesson that the goal of the course is for the student to be completely comfortable with all aspects of kiteboarding; completely immersing them in the lesson and allowing them to take the pilot’s seat. Kev said, “I was expecting the instructor to do all the dirty work and leave the student to focus on flying, which I personally feel leaves the student with a partial understanding of what’s being taught; similar to a child thinking he can ride a bike while the training wheels are still attached….” Bart’s instruction was the exact opposite. The student was completely hands-on in every part of operating the kite. From unpacking and inflating the kite, setting up, launching, flying, and landing the kite, the students were at the center of the lesson.

After a quick session with the small trainer kites, the group moved on to the larger kites. Again, Bart had them launch, fly, park, and land the kites. They were given instruction on a total of four different sized kites: the 3m trainer kite, and 9m, 12m, and 14m, allowing the students to get a feel for the unique maneuverability and power of each kite. “The power of the larger kites is incredible! Even at 230lbs, the 12m and 14m kites were lifting me up from sitting to a standing position and dragging me 10-12ft, but in a controlled fashion,” Kev said. 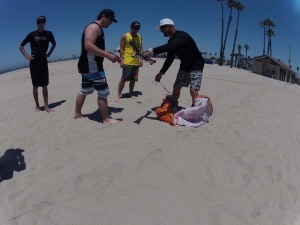 competent kite boarders, not people with a partial understanding.” Bart’s IKO certification was evident as was his passion for kiteboarding.

Both Darren and Kev would take the course again in a heartbeat. Not only did they both enjoy the lesson so much that they want to go back as soon as possible, they both want to hang out with Bart on a regular basis.

15 thoughts on “Never “Board” in California”