Exerting all of your energy while trying to paddle out, falling off of the board, and enduring

the constant crash of waves on top of you may not sound like a great day, but the exhilarating feeling of catching your first wave and learning a new sport is California’s most awesome adventure. It wouldn’t be a proper visit to California without surfing. When I heard that my brother, Kevin, was going to visit, I knew the number one thing on his California Bucket List would be a surf lesson. Banzai Surf School is a family run business and one of the few NSSIA accredited surf schools in Huntington Beach. Open year-round, they provide experienced instructors, surfboards, wetsuits, and all the sand you can eat. Our lesson wasn’t without its falls and frustrations but our determination and drive got us up on the board again and again.

The two hour lesson started with basic instructions and beach practice. We listened attentively and asked a few safety questions before heading out to the waves. Our 10 minute instruction covered the basics including:

There’s a ton of other safety issues, skills, and fine tuning that the surf instructor gave us while in the water; after all, surfing can’t be learned from a book – there are too many variables.

With all of that in mind, we both struggled with actually getting up on the board

at first. We took each wipe out like champs and kept on truckin’.Kevin’s entire body exuded confidence and pride when he stood on the board.
Normally two hours of intense physical activity would be completely exhausting, but the adrenaline that consumed both of us pushed thoughts of quitting out of our minds. Surprisingly, even after our two hour lesson time ended, the instructor stayed in the water and let us continue. It was obvious that teaching others to surf wasn’t just a job for him. He was having as much fun as us. It was his reassurance and hard work that helped us get on the board in the first place.

Companies like Banzai Surf School are difficult to find. The owner, Jaz, doesn’t run the school with the soul purpose of making money. He’s a Hawaiian who loves the ocean and the waves and he instills that passion in others. His son is also an instructor with Banzai and his daughter enjoys taking surf class in school. (Yes, many beach schools in California offer surfing as a class; how cool is that?) 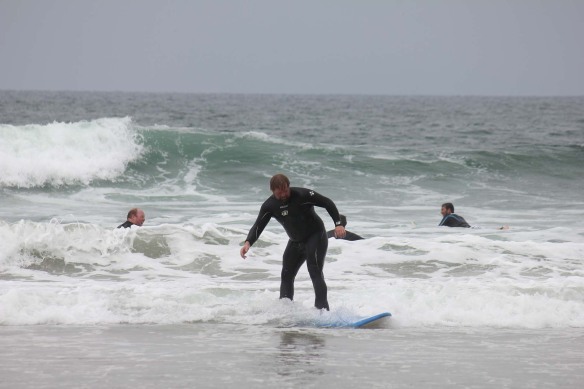 Kevin viewed the surf lesson as a wise investment that saved time and frustration. He used the local knowledge from the instructor to practice on his own throughout the week. One two-hour lesson gave him the confidence to get out on the water on his own and enjoy the surf of Surf City USA.For me, it was an affirmation that with practice and patience, I could make surfing a daily activity. It’s like riding a bike; it will become second nature… in time.

23 thoughts on “Surf’s Up, Man Down in Huntington Beach, California”