The night before we left California, we wanted to spend one last evening on Laguna Beach 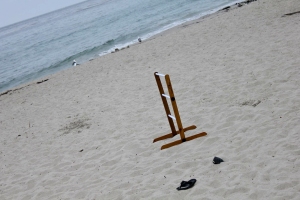 and what better way to enjoy the evening than playing beach games. We chose Ladder Golf since it’s our favorite beach game and it was a huge hit. Everyone that walked by either stopped to watch us play or ask us where we bought the game.

Ladder Golf is played with 2 or more players or teams. Each player has 3 golf ball bolas. A bola is 2 golf balls attached by a nylon rope. The object of the game is to wrap your bolas around the steps of the ladder. The ladder consists of 3 steps, a top, middle and a bottom step. 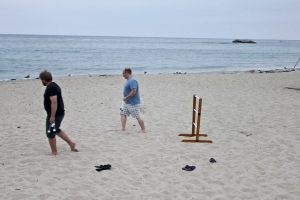 It only took seconds to set up the game and we rotated in players so that one person could relax with the baby at all times. Darren and Kevin were up first. The basic etiquette of Ladder Golf, or what we consider as official rules, states that contestants should make as many remarks, sounds, or movements as possible during play in order to distract the opponent’s during play. Two brothers playing against each other intensified our rules and added to the commotion. It was Kevin’s first time playing but he picked it up quickly, especially the trash talk. Instead of going with the winner continuing, we opted for  letting the loser play through. it seemed like the fair option for the new player rotation in. Darren won the first round 21 to 16, but Kevin was a great sport about it, after all, he got to keep playing. I won against Kevin but stayed playing so that each person would get to play twice.

People of all ages checked out the game and asked us where we bought it. One little boy, 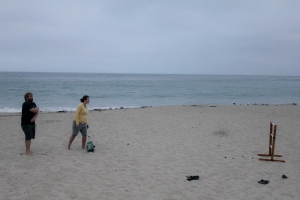 who was no older than 7, was particularly interested in the game. As he watched in amazement, I asked him if he wanted to have a turn. His eyes grew big and he looked to his father for approval. We might have amended the throwing location slightly, but he got the hang of it quickly. He left a happy camper after successfully landing four tosses. An elderly man jumped at the chance to toss a few as well. He took it more seriously as his wife stood by. She was too timid to attempt a toss herself but they vowed to buy the game and practice at home before taking it out in public. Even a few younger boys looked on and encouraged our game play. 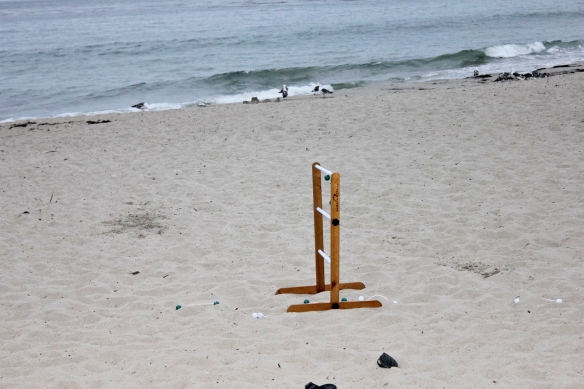 We lived in California for a year and a half and only met a handful of people, yet in one evening we had meaningful conversations with the boy’s father, the elderly couple, and a couple slightly younger than us. Maybe we should have brought the games to the beach sooner.

67 thoughts on “The Hit of the Beach – Ladder Golf”