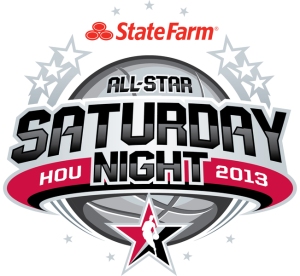 grandfather and my brother. Spud Webb’s Slam Dunk victory over Wilkins making him the shortest player ever to win the contest, Michael Jordan’s perfect 50 dunk from the free-throw line, and Isiah Thomas’s 30 point game will forever be etched in my brain as inspirational and unforgettable memories in my life. It’s moments like these that remind you that greatest is possible. I still remember saying, “Imagine actually getting to see this in person”, as my brother and I watched in awe. We all know that I’m not one to stop at “imagine” and next weekend one of my childhood dreams might actually come true. Yes, readers, I’m planning to attend NBA All-Star 2013.

QuintEvents is the only event company with Official Relationships with 6 of the world’s
greatest names in sports including:
NFL On Location
NBA
Churchill Downs®
Breeders’ Cup
Formula One Paddock Club™
Circuit of The Americas™

I’m going to partner with them to experience NBA All-Star 2013!

This is what I’ll be doing:

Friday – BBVA Rising Stars Challenge – I’ll experience 18 of the league’s brightest young stars from the Rookie and Sophomore classes battling it out in an epic game played in two 20-minute halves with no foul outs.

Sunday – 2013 NBA All-Star Game – Basketball’s heroes face off in a battle of East vs. West in an all-out star spectacular game.

I included an NBA game on my 2013 Bucket List, but this is even beyond my wildest imagination. Following my philosophy, the more unrealistic I am with my dreams and goals, the more I’m able to achieve, I’ve been thinking outside the box and stopping at nothing. 2013 is going to be epic!

Stay tuned for photos, videos, and NBA stars. You can follow me to the games, behind the scenes, and around Houston, Texas. I want this to be the most interactive, up-to-date experience yet! It will be a blast to bring you along.

Questions to you:
1. Which NBA legends do you want to meet?
2. Is this on your bucket list?
3. Which sporting event would you like to attend the most?

“The purpose of life, after all, is to live it, to taste experience to the utmost, to reach out eagerly and without fear for newer and richer experiences.”

67 thoughts on “Childhood Dreams Made Reality: Can You Say “All-Star”!”