over Team Shaq. Every time Kenneth Faried of the Denver nuggets touched the ball, he got a basket. 40 points in 40 minutes, along with 10 rebounds, made him worthy of the MVP Award in the BBVA Rising Stars Challenge! It didn’t take floor seats to see that Faried is a “rising star”, but there was more to the evening than rising stars and sinking baskets. The Little Dippers, the Kiss Cam, the Dance Cam, the Rockets Power Dancers, the Mascots, the announcers, the cameramen, and the energy in the crowd all came together to create the magical event that I envisioned. 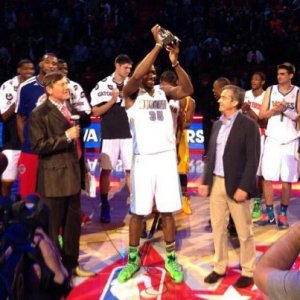 Faried was entertaining with a series of dunks and quick moves, making the anticipation for today’s event, Sprite Slam Dunk, even stronger. Sacramento’s Isaiah Thomas added 18 points and 10 assists for Barkley’s team, while Cleveland’s Kyrie Irving, last year’s MVP, scored 32 points for Shaq’s team. The last few minutes of the game devolved into a spontaneous dunk contest with players taking turns showing off their acrobatics. Faried once again drew the biggest cheers with four monster dunks. Admittedly, my favorite part of the evening was the high-flying, slam-dunk action, but there was so much more that kept the energy flowing.

The Little Dippers were beyond cute in their uniforms and they really could shake it; it was beautiful to see them with such determination! The Kiss Cam and Dance Cam always catch at least one unsuspecting spectator by surprise, and the Mascots added to the fun. If any guy in the stadium was distracted at all, which would seem impossible, their attention

would have been quickly drawn back to the floor when the Rockets Power Dancers emerged. Can you say hot, hot, hot? I always admired the courage and positive self-image those women must have to be able to dance on the court with thousands of people watching. Everyone involved in the game, including the announcer and the cameramen, added to the energy level. They were all like the skydive instructors egging me on every time I jump. 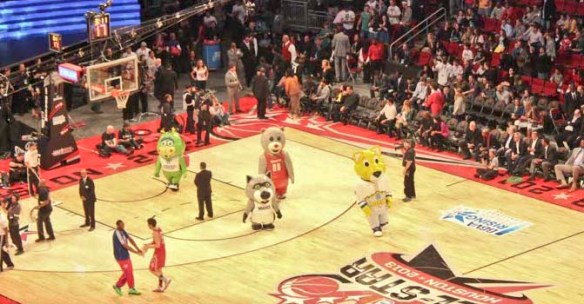 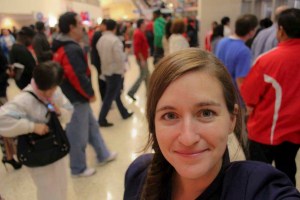 When I left the game last night, I thought I’d be ready to sleep. I had a long day with a 4:30 am start. I flew to Texas, checked into the hotel, explored the city, and went to my first NBA game. Rather than feeling sleepy, though, I was wide-eyed. I wanted to shout from the roof-top, I wanted to yell, I wanted to tell the world that going to watch the NBA was even better than I imagined. It isn’t just the players that make it a game. There are thousands of people, including the fans, that bring the stadium alive with energy. I can’t believe I was part of it, and I can’t wait for tonight!

19 thoughts on “All Faired Up – BBVA Rising Stars Challenge”