Recently, I went to Fiji on a press trip and I was so joyfully overwhelmed with their friendliness, kindness, and loving manner that I proclaimed that they could quite possibly be the nicest people in the world, but yesterday I met Jordanians and I might be singing a different tune.

I arrived at JFK airport yesterday in a sad state. I was sick; so sick that I thought I was going to pass out on the flight from Charlotte to New York. I was completely weak and that rush of heat flowed over my body on the plane – the sure sign that I’m about to hit the floor. Nothing helped. I asked for water and the airline attendant brought it along with a bag of ice for my neck, but it didn’t stop there. I had a fever and chills. I got off the plane and had to wait in the airport for another 7 hours before boarding Royal Jordanian. How could I fly for 11 hours like this? I actually considered catching another plane back home and canceling my flight. The only thing that stopped me was that I saw it as a once in a life time opportunity.

I was given a middle seat in a middle row, but I thankfully asked to be moved. I figured if I

could get a few hours sleep on the plane in a window seat, I might be able to make it. When I asked to be moved, not only was a given a window seat but the attendant said he’d do everything he could so that no one was sitting next to me. He related to me by saying that he had a similar thing happen to him a few months ago when going to the Dominican Republic. It ruined his entire trip and he wasn’t going to let that happen to me.

Sure enough, when I got on the plane I had the two seats to myself and I was in a seat with a curtain that could be drawn for complete privacy. Before I could even sit down, another airline attendant brought me a cup of ginger tea with lemon. He said, “I heard you weren’t feeling well,” when he arrived with the tea and a smile. It might sound like a simple gesture, but that cup of tea was exactly what I needed. Have you ever felt so sick that you just didn’t know what to do with yourself? Add flying on a plane to that and it’s a desperate situation. I was freezing and burning up at the same time. Tea was the solution. 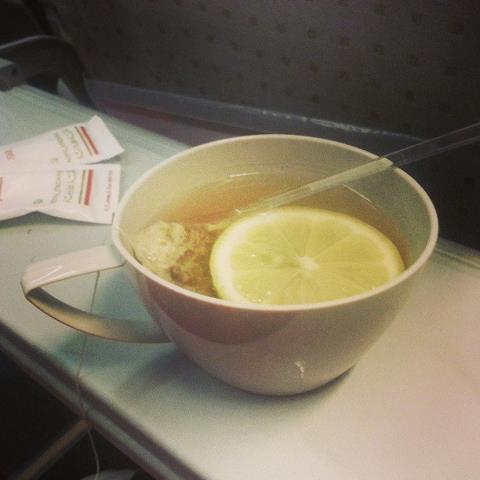 I set up my pillow and blanket and rested my head. Yet another attendant approached me and offered ear plugs. It was first class service in coach.

They continued to check in on my during the entire flight by closing the window shade, getting me an extra blanket and pillow, and bringing me lots of water. Once they knew I was asleep, they made sure no one bothered me. It was like being taken care of by my mother, always knowing when I needed something and when to leave me rest.

All of this kindness and it’s only day one! I can’t wait for what’s in store for me over the next 9 days.

55 thoughts on “Fijians, You Have Competition”