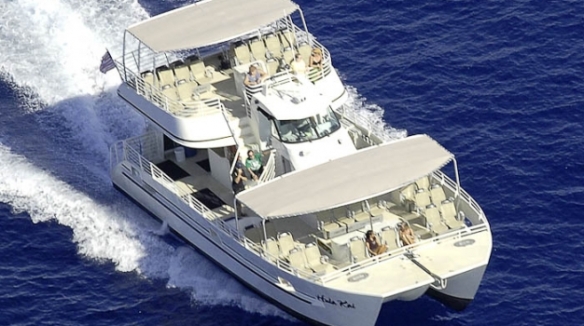 Our morning started with the friendly staff at the Hula Kai/FairWind. Darren met the dive master, Dan, and asked a ton of questions, each was welcomed and supportive. We were already getting excited about our day.

The ride to the first snorkel spot was smooth and refreshing. I sat next to a lady who was deep in conversation with her husband. I could hear her say that she worried about being sick and I actually considered moving to another seat. Thankfully, I stayed because not only was she perfectly fine the entire day, but they ended up being the nicest, most entertaining people we met during the vacation.

At the first snorkel spot, the Captain Cook Monument site, Darren and I snorkeled hand-in-hand for almost an hour. Normally, I’m timid in the water and I often worry about what’s around me or if I’m alone. With reassurance that Darren was at my side, though, I felt completely calm. We made our way toward the reef and I noticed a few, small fish. I thought, “I can handle this. This is kind of pretty.” Then, more and more fish started appearing before us. I held Darren’s hand a little tighter but they were all so beautiful that I didn’t want to swim back to the boat. I wanted to experience more and more. Yellow ones and black ones and blue ones all swam this way and that. They weren’t interested in what I was doing or aggressive in anyway. They were just swimming and even playing sometimes. I loved it. I wanted to stay there all day and be part of this world that I rarely experienced. That must be how Athena, or children in general, feels all the time. Everything is so fresh and new. It was exhilarating.

We made our way back to the boat after an hour, not because we wanted to leave the beautiful experience, but because we were starting to get hungry. Back on the boat, a delicious breakfast of quiche, fruits, breads, yogurts, granola, and juices was spread out on a bar.  We had lots of time to eat before continuing to our next snorkel location. Darren was beaming with anticipation; he was about to embark on his first ocean dive. 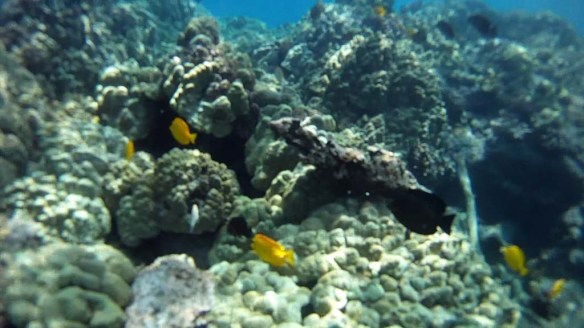 Darren’s dive partner was Dive Master Dan, making us confident that he was going to be safe. I, however, was going to be alone since Darren was diving and I was only snorkeling. Luckily, the lovely couple that we met was gracious enough to offer to take care of me. They took me under their wing and never left my side. I felt just as relaxed as when I was swimming with Darren. They were kind and thoughtful and I felt like I had known them my entire life. Again, I had an amazing experience.

When Darren ascended from his dive, I could see the joy on his face. He was a chatterbox, explaining every second of his adventure. But the coolest part was the preparedness of Hula Kai Adventures. From the time they gave instructions on the boat until they returned to the surface, the dive master made each diver feel confident and comfortable. He explained exactly where they were going and how long the dive would last. He even used a book to point out the possible fish they could see. For rare fish, he showed them a hand symbol that represented that fish in case they came across it during their adventure. He took the time to show them the features of the equipment, especially in regards to safety. During the dive, he was knowledgeable of the area and the aqua life. He kept everyone calm and provided an amazing tour, yet he was still checking on everyone’s safety regularly. Darren would have gone back down immediately if it was an option. He was over-the-moon about his first dive. 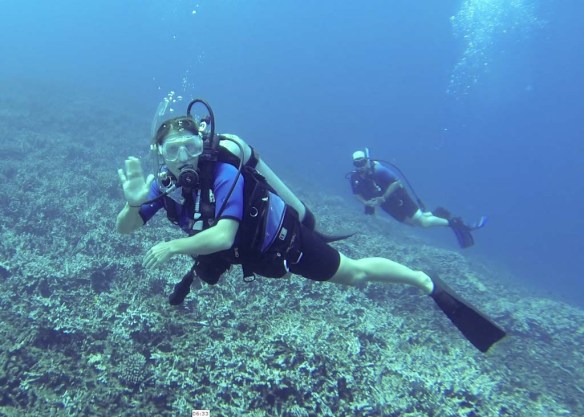 Lunch included chicken, burgers (including veggie burgers), salad, chips, bread, and drinks. I ate quietly while Darren explained more about his dive and our new friends listened with encouraging nods and smiles. Normally, I’m the one that doesn’t shut up but I was extremely happy to see Darren’s passion for diving. 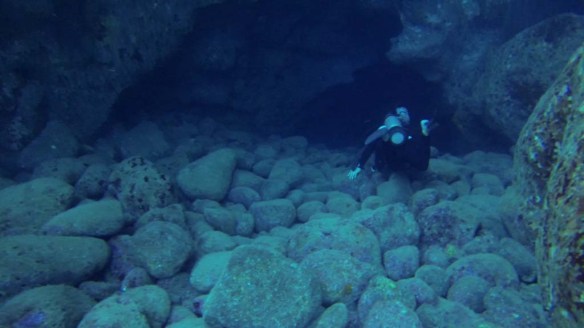 The ride back seemed like it was only five minutes even though it was more like forty. The snorkel spots, the dive, the food, and the company easily provided forty minutes of conversation and that conversation continued throughout our trip. Hula Kai Adventures is an experience not to be missed.