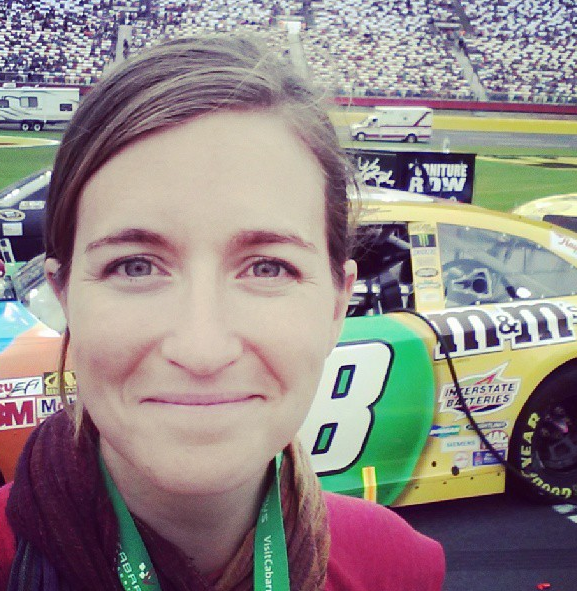 Food and drinks, inflatable slides, bounce houses, face painters, caricature artists, remote control cars, a Ferris wheel, balloon twisters, jugglers, pit tours, ride-alongs, driver introductions, tightrope walkers, and a Goo Goo Dolls concert were all a pre-show to the Bank of America 500 NASCAR Sprint Cup Series race hosted at Charlotte Motor Speedway in Concord, North Carolina this weekend. The actual race is held as part of the Chase for the Sprint Cup and is 500 miles (800 km) long, lasting almost four hours, but the whole experience begins and ends well outside the race hours. It was like attending the most overwhelmingly amazing fair or festival with over 100,000 devoted, happy, excited fans. I had no idea what to expect when attending a NASCAR race but never in my wildest imagination could I have envisioned such an elaborate adventure.

I was hosted by Cabarrus County Convention and Visitors Bureau so I assumed that most of the experiences I was having were offered to special visitors only but the more questions I asked, I realized that tickets can be purchased for any of the activities, including the Pit Tour.

We arrived at 2 pm when the gates opened. Parking in the VIP Green area, we walked across the spectator bridge to the Charlotte Motor Speedway. The massive structure was beyond imposing. The complex encompasses nearly 2,000 acres and includes a 2.25 mile road course, a six-tenths-mile karting layout and a quarter-mile oval within the walls of the 1.5-mile superspeedway. A one-fifth-mile oval is located just outside Turn 3. Shuttle buses transported guests to their gates but with tons of time, we decided to walk to the 600 Terrace at Gate 12. 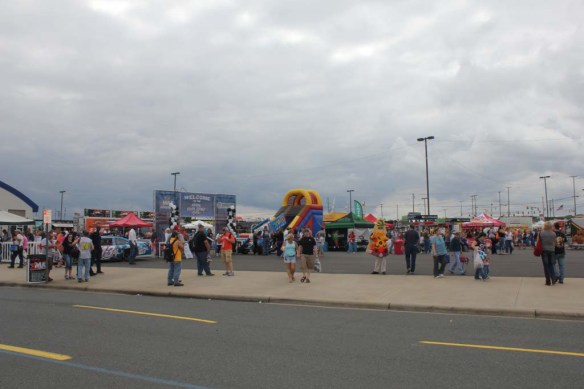 To the right, we noticed the Fan Zone. Rides, games, music, and artists filled every corner of the grounds; it was a whole new world within a new world. I was in an elaborate dream complete with bright clouds, unrecognizable people, and festival-like events. The Fan Zone included displays and entertainment like the SPEED Stage, Sprint Experience, and the Powerade PlayZone. Although we didn’t participate in any of the games, I would have enjoyed the inflatable bungee run and the giant slide the most. Inflatable games are like a magnet. It doesn’t matter how old I get, I’m never too big for inflatable fun. I heard that parents brought their kids to NASCAR races but I never understood why. Now, I totally get it. It’s a giant playground for all ages. We could have entertained ourselves for the entire day at The Fan Zone, but we needed to continue on our way.

Outside of Gate 12, there was a smaller track with two cars offering ride-along adventures. They were pre-booked but we watched as guests sat in the passenger seat of a muscle-car and a professional driver gave them the ride of their lives. The track was in the shape of a figure eight and the car drifted sideways during what seemed like the entire ride. I didn’t hear anyone screaming but I can guarantee that you would have heard me on the other side of the Charlotte Motor Speedway complex. We asked if the experience was available during other dates and times because it’s going on the list. 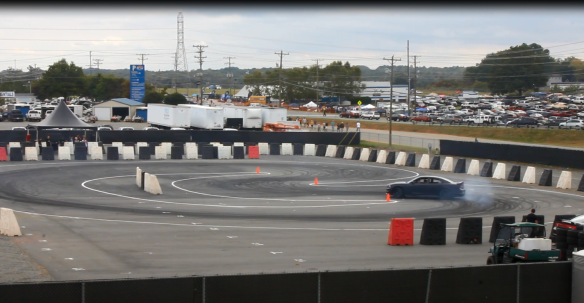 Our host was waiting for us inside 600 Terrace, an outdoor lounge area. Food and drinks were available but I lost sight of that when I noticed the track view. We were so close to the track that I knew we’d feel the wind and tire pieces from the racing cars. That’s when my excitement level kicked up an extra notch. I noticed headsets, seats, and ear-plugs, and mile-long views. This was the beginning of a new obsession. 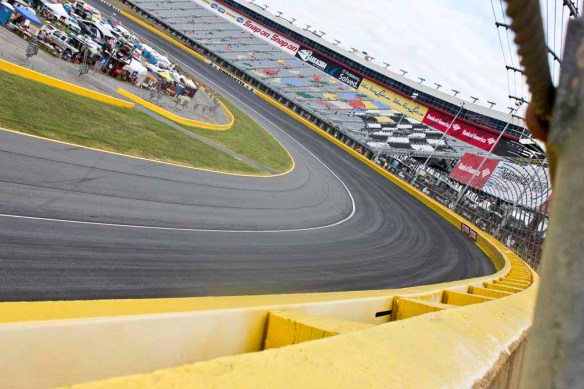 Our assigned Pit Tour was at 4 pm. The Pit Tour gave us a detailed look at what goes on “behind the scenes” before the cars even hit the track. That area is generally a restricted area so we were assigned a specific tour time but anyone can purchase Pit Tour tickets for themselves. There are a limited number of passes, though, so pre-planning is a great idea. 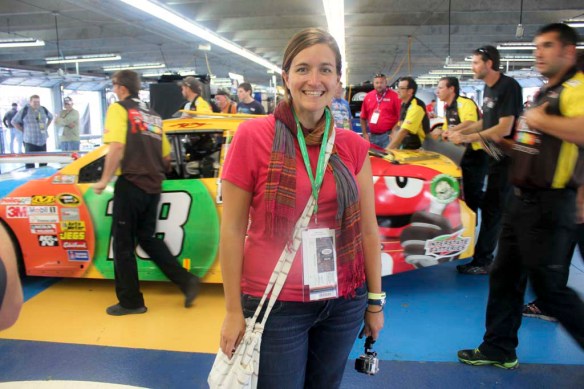 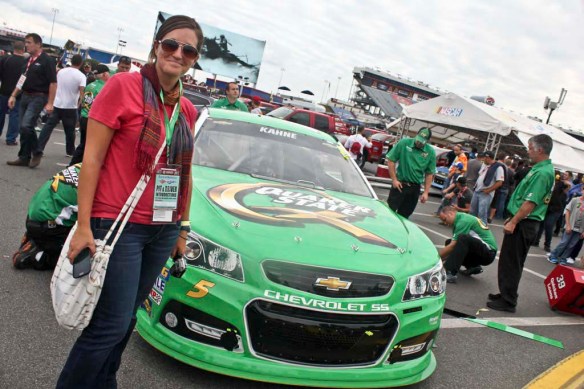 Shockingly, driver crews were buzzing around, moving cars and testing parts. It wasn’t uncommon to have a car pass on my right or left and a few of the drivers casually walked by as they were preparing for the race. I was in the heart of it all. I don’t know of any other sport that allows such an up-close-and-personal experience. I have a new respect for NASCAR.

We returned to the 600 Terrace for the race. You may think you know what it feels like for dozens of race cars to pass right in front of you driving at speeds averaging around 155 miles/hr, but it’s totally different when you actually feel it for yourself. I put the FanVision headset over my ears, leaned against the fence, and listened to the roar of engines starting on the track. It was already louder than I expected and the cars weren’t even driving yet. It was an instant adrenaline rush. 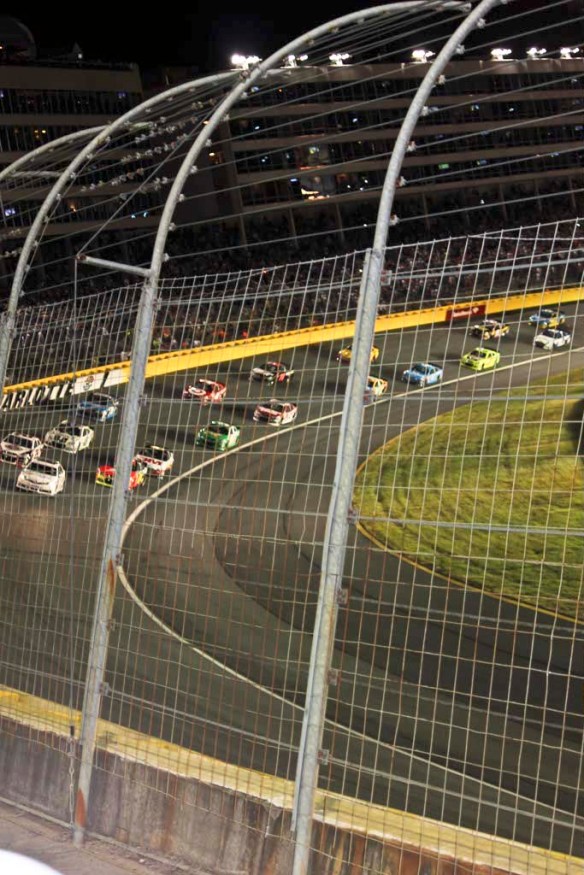 The cars passed our terrace with the pace car leading the pack. I could feel the wind rushing by and I let out a small yelp that others couldn’t hear because the nose of the cars encompassed us. I was more excited than I anticipated. It wasn’t like watching it on tv. With everything that was going on, I was part of the race. 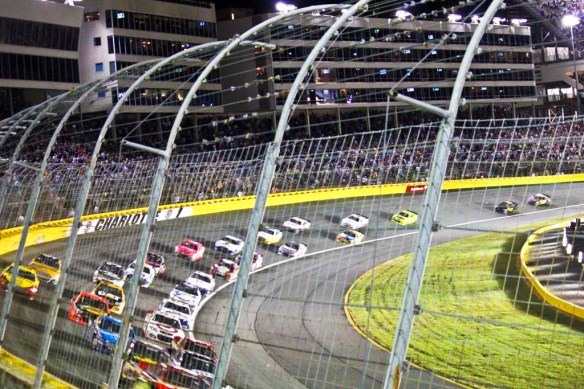 The first, actually lap happened and I had to turn my face because of the debris. I looked down and a few small pieces of black rubber were on my arm. “Holy Sh*t! That was intense,” I said to Darren and he knew I was hooked.

Admittedly, I know very few of the drivers so rooting for someone seemed wrong. I was among true, die-hard fans who followed the sport around the country. But we wanted to up the ante so Darren and I made a decision to cheer for different drivers. Rather than picking someone like Jeff Gordon or Dale Earnhardt Jr. who we both knew, we chose a number from a hat and that was our car. I had Jimmie Johnson and he held the spotlight for countless laps. Although he didn’t win, I loved the contest side of it. It made us cheer even harder during each lap. 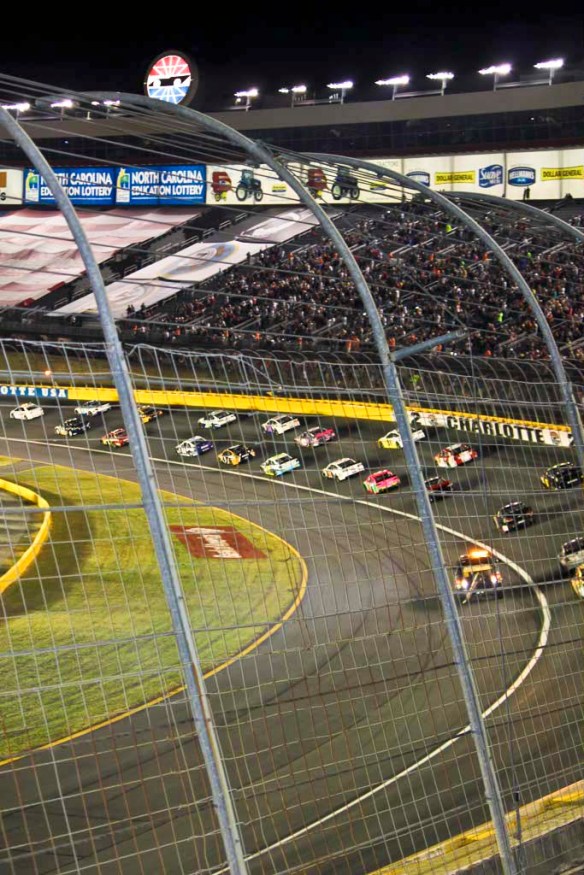 500 miles is a lot of racing. I thought I’d get restless and want to leave but I didn’t even leave the fence for a drink. If someone didn’t come around and offer one, I didn’t get it. Darren and I learned to chat when minimal cars were passing but even then it was difficult to hear each other. We used number signs to express our thoughts and number 5 was a frequent topic of conversation. He was aggressive and dominated Turn 4. Although it was on the other side of the track, I could still see his skills to overtake a car around that turn. Each lap was unique and gave me more insight as to why spectators love the sport.

After the race, I heard at least three people say, “I can’t hear anything but that was awesome!” We maneuvered through the crowd to get back to the car as we debated the race. I walked in the not knowing one driver’s number and only two names. I left discussing why number 5, Kasey Kahne, should have won the race and how well number 48, Jimmie Johnson, did during the second half. I explained why I was so surprised with number 2, Brad Keselowski, and his win. We opened the car door with a conversation about the importance of duct tape in racing.

I looked in the car visor mirror. My face was full of dirt. It was caked into the bridge of my nose where my glasses sat. My white sweater was covered in black dirt from the track. I wanted to take a picture. This is what racing was all about!

I can’t wait to get behind the wheel for myself next month!