I can’t breathe. I can’t get my breath. There’s too much air; it’s choking me. I can’t get back to the surface. What do I do? The weights are too heavy. I’m going to drown… I’m sorry, Athena. Mommy can’t come home to you. I’m not going to make it this time. I’ve failed.

I have fears. Great ones; debilitating. People always assume that I’m not afraid because I jumped out of a few planes or I’ve tried some extreme adventures, but put me under the water with a regulator in my mouth and I have a panic attack. It’s disappointing, disheartening. I try to look at fear like a challenge. I’m capable of over-coming it but scuba diving has beaten me.

Every year, I create a bucket list of activities that I’d like to experience. I put a lot of thought into which items should make the list and if it’s humanly possible to accomplish every item in one year. Readers, friends, and family often think that I’m completely unrealistic about my goals, but I believe the more unrealistic I am with my dreams and goals the more I’m able to achieve.  Last year’s list included 50 items and I completed all but two of them – an African safari and using a regulator (scuba diving or SNUBA) under water. Two weeks ago, I visited Namibia for an African safari and made my number one bucket list item a reality. That only left using a regulator under water.

Yesterday, I visited Coral World in St. Thomas for a SNUBA experience. SNUBA is a form of diving that is a mix between snorkeling and scuba diving. A diving regulator is used but instead of air coming from tanks strapped to the diver’s back, it comes through a long hose from tanks on pontoon rafts on the surface.

Todd, my instructor, was calming, encouraging, and supportive. Even the way he looked at me gave me confidence. I was going to do it! I could do it.

We practiced on a platform first. There were three of us but I was the only one nervous. The other two guests were a newly married couple who were comfortable using a regulator and had an introductory scuba course and dive experience under their belts. I had an epic failure under mine. The last time I tried SNUBA in Aruba in 2013, I couldn’t get over the fear and I let it take hold. I gave up and left defeated. Exactly one year later, I found myself trying again here in St. Thomas.

The practice run encouraged me further. I was keeping my head in the water and I could breathe with the regulator in my mouth. Then, we headed out further and I had to actually dive down. It all went south from there.

The over-whelming sense of panic. The loss of rational thought processes. The fear… gripping me, taking hold. Did I do it? Did I swim away, defeated… again?

NO! Not this time! I kept trying and so did Todd. He encouraged me to take the belt off for a while until I felt more comfortable. He talked me to in a calming, reassuring tone. He believed in me. He even tied a line to the ocean floor so I could pull myself down that way. He set me up for success.

After only a few minutes without the belt on, I decided to try going under once again. Todd distracted me at the bottom by letting me feed the fish with some food he had in a bottle. It gave me something else to focus on and my body naturally responded rather than me over-thinking it. 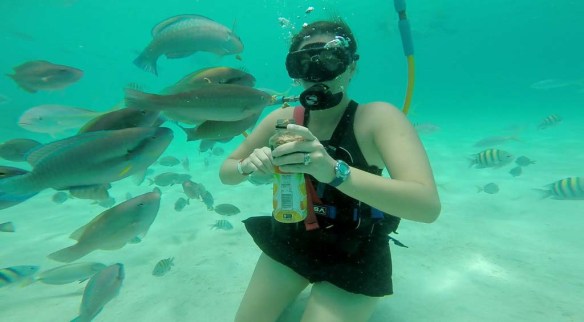 He must have seen the panic creep up on me after feeding the fish and he reached for my hand. We held hands and explored the ocean floor together, pointing out coral and other interesting sights. I found a place outside of my comfort zone and something changed. It just happened. I could breathe. I noticed that the exhale was much longer than the inhale but it wasn’t a problem anymore. It was happening naturally. The bubbles floated by my face and I could hear my “Darth Vadar” breaths but it wasn’t scary; it was beautiful.

I wasn’t on top of the water looking down on another world. I was immersed in it. And I realized that that’s the beauty of travel. This is the experience that I crave, that is addictive, and that makes long flights, delays, and jetlag all worthwhile.

You may say it doesn’t matter if I succeeded or not as long as I tried, but I don’t believe that. I want more for myself.  I have fears and they can be intense and intimidating, but I won’t let them become crippling. This time, it was the encouragement and support from Todd that helped me get through one of the most frightening experiences, but I still did it. I found a way and I will continue to push my limits and fight for a world less fearsome. I will not die an unlived life. I love fear and the feeling of overcoming it. Success. We are all capable of it.