Unknowingly, I’ve been creating a bucket list for Athena. She looks at travel destinations and activities with me and her comments and excitement determine a lot more than I realized.  Her recent interest in petting, holding, and interacting with animals led to our weekend at Alisal Guest Ranch. At the Alisal Bard Yard, children can be lead on horseback around the corral. I had no idea that children Athena’s age, and even younger, could ride on a horse and the opportunity was too good to pass up. At only 3 hours away from us, Alisal Guest Ranch was a good weekend getaway option. Plus, we could cross riding a horse off Athena’s bucket list; and if it was something she truly enjoyed, we could explore the possibilities in more depth.

I worried that she would be nervous or that I was expecting too much from her. Could she ride the horse on her own? Could she hold on by herself? Should I hold her? I realized that worrying didn’t change or help anything. What was going to happen, would happen whether I worried or not. We’d manage the situation naturally. If she needed more support, I could provide it and if she was fine, I could back off. As a parent, letting her grow up and be independent is a struggle. I want to hold on for dear life; feel needed. I can imagine it will only get more difficult as she gets older.

After our morning Hay Wagon Ride, we walked over to the corral and noticed a line. It gave me more confidence to see other parents with younger and older children riding the horse. It’s like when I want to jump off a high cliff into unknown waters. I’m never the one to go first or even second, but after watching two or three other people successfully emerge from the dark waters unharmed and smiling, I’m all for jumping in. I can only hope that Athena will learn to test the waters for herself. Until then, I’ll do it for her. 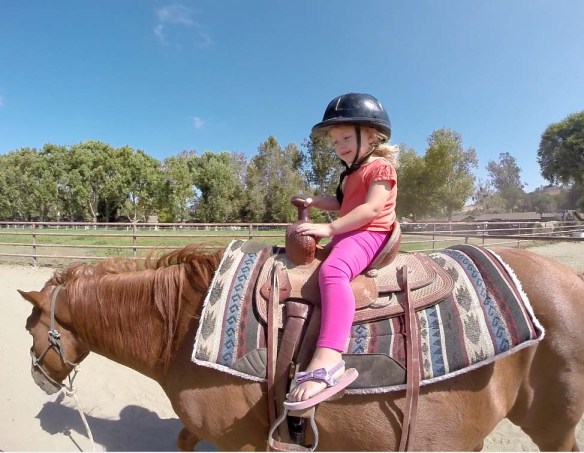 Darren put her up on the horse and held on to her as I guided the horse around the corral. Within a minute, he let go. I don’t think I could have done it so quickly but he was confident that she was holding onto the saddle and sitting comfortably.

She was smiling and giggling as the horse gracefully moved around in the open air. With her curly hair blowing in the wind and her long legs draped over the horse, I saw a little girl and not a baby. I don’t know when it happened. How did she make the transition? How did we get to this point of less dependence?

Athena may only be two and a half years old, but she knows what she wants and what brings her true joy. She’s old enough to decide for herself what adventures she’d like to experience and I’d like to continue providing her the opportunities to experience them.

Do you have a child? Do they have a list? Imagine what we could accomplish if we started thinking about our dreams and goals at such a young age. The world is full of possibilities; let’s see them at a different level.

19 thoughts on “Does Your Toddler Have a Bucket List? Crossing off Horseback Riding at Alisal Guest Ranch”