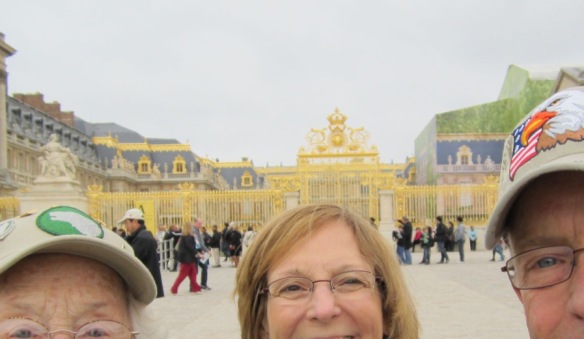 I had a great trip to this fantastic and beautiful city not long ago. Monday was a day off for a national bank holiday in England where I had been working for nearly two years, I took Friday off as a vacation day, and arranged a package tour flight that departed early Friday and returned late Monday, giving me nearly 4 full days in “vive’ la France”. As soon as I arrived in town I raced to my hotel, checked in, dumped my bags in my room, and left Paris!

I hopped on the underground metro (it’s a good system, once you’ve deciphered the French destination names), found my way to the Invalides station, followed the signs and long passageway to the RER LINE C rail line, and boarded the train for Versailles. (Be sure you get the train to Versailles R.G. (Rive’ Gauche) and not the other Versailles. They’re in the same direction but they’re not the same place.) What can I say about the palace of Versailles except that it’s a huge place, you can spend a lot of time there, and it is so ostentatious that it has led me to coin the phrase for anything overly fancy as being “tres’ Versailles”. (The world is not rushing to pick up on this euphemism but you catch my drift.) After a long day wandering only a portion of the palace and grounds it was back to Paris for the night.

The next day was spent in the city, for what is a weekend in Paris without a day in Paris. When the going gets tough the tough go shopping so I was at the elegant department store Galerie Lafayette (tres’ Versailles) when the doors opened. Of course, I only went to admire and photograph the late-19th century dome and stained glass. Then it was off for the obligatory visit to the Muse d’ Orsay to refresh my appreciation for the French Impressionists and the beautiful architecture in which it is housed (not tres’ Versailles, but truly an exquisite conversion from railway station to art museum).

It was out of Paris again on Sunday. This time to the railway station Gare St. Lazare for the train towards Rouen, getting off at Vernon (some 50 miles N.W. of Paris) and renting a bicycle from the station attendants for the flat 4-5 mile ride to the village of Giverny. Here one can get another impression of Impressionist Claude Monet. His country home and flower gardens, where he lived and which he painted during the last 30+ years of his life, flourish again. It’s a beautiful place, but a word of warning, this small country retreat may have more tourists per square inch than any other place in France. I arrived at 9am, the place didn’t open until 10, and there was no one in sight. By the time I joined the queue at 10:15 (I could have started the line) there were well over 100 people ahead of me and the crowds continued to

Swell and jostle during my entire visit. Nothing like peaceful countryside. The gardens are very beautiful, though, especially if you know and love Monet’s work. 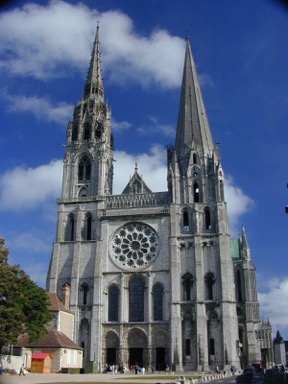 The following day I didn’t have to leave for the airport until 5-ish so it was off to see the incredible cathedral at Chartres, some 55 miles S.W. of Paris. (So what did I do with Paris nights? Well, that’s a SEEEE-cret. Actually, it was nothing more than fine dining and late evening jazz, but that’s another story and this one is about Paris side-lines, not Paris nightlife.) I made my way to railway station Gare d’ Austerlitz and headed out of town. Chartres is both a beautiful town and a cathedral, each relatively unscathed throughout the centuries and retaining a lot of their medieval character. The cathedral has some of the oldest and finest stained glass windows in Europe, much of it dating from the mid-12th century. An expatriate Englishman, Malcolm Miller, lives in Chartres and gives free tours of the cathedral. From his lengthy studies he is able to take people to some of the stained glass windows (different ones each tour) and give a detailed, enlightening, and entertaining description of the window’s religious story and how it related to medieval life in and around the cathedral. Absolutely fascinating. (One of my favorite American actors, Martin Sheen, was discretely and nondescriptly part of our tour, giving us people watchers something else to nudge and whisper about.) 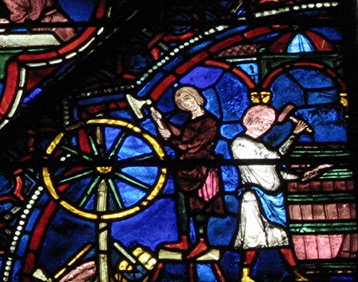 Eventually, without rushing, I made my way back to Paris and on to the airport for my flight to England. How can I sum up my trip? Easy. I LOVE PARIS! LOVE IT AND LEAVE IT!

***Since I’m in Antarctica without internet access for 22 consecutive days, I’ve selected a few articles from other great bloggers to share with you. I’ll be back on February 3rd, 2015 with loads of fantastic adventures from Antarctica to share. Chat soon.***