LEGOLAND California was the last major amusement park left for us to visit in Southern California. We visited Disneyland, Adventure City, San Diego Zoo, San Diego Safari Park, Knott’s Berry Farm, and The New Children’s Museum but LEGOLAND reminded on the top of Athena’s bucket list. With more than 30,000 LEGO models created out of more than 60 million LEGO bricks, over 60 family rides (including 3 roller coasters), “hands-on” attractions, shows, a water park, and an aquarium, LEGOLAND California provides education, adventure, and fun for all ages. She must have seen a commercial or an ad somewhere that showed LEGOLAND’s Water Park because it’s all she talked about for the last two months and when we finally arrived, it didn’t disappoint. Gliding down a water slide was everything she’d hoped for and more.

We spent the morning exploring the park. Fun Town and Miniland took up most of our time. Athena enjoyed Flight Squadron, Fireman’s Challenge, Junior Driving School, Sky Cruiser, and Skipper School. We arrived early and every ride was under a five minutes wait except for Sky Cruiser. The cool thing about the Sky Cruiser line, though, was that it had a center section for children to play while one or both adults held a spot in line. Just as the line was ending, children could use the side door to join their parents. Athena was able to build and play with Legos and other children while we waited in line. It was fantastic planning on behalf of LEGOLAND. Skipper School allows children to maneuver their own LEGO boat. It was Athena’s favorite ride and we could have spent the entire morning on the little lake learning to maneuver our ship, except Dad was anxiously awaiting a tour around Miniland. Miniland USA is the heart of LEGOLAND. A dedication to the ultimate expression of the LEGO art form, Miniland includes reproductions of seven areas of the United States, all constructed with 20 million LEGO bricks in 1:20 scale. It was mind-blowing! Darren took tons of photos of Star Wars Miniland, while Athena and I admired Vegas. We packed in way more than anticipated then headed to Skyline Cafe in LEGOLAND Hotel for lunch.

The rest of the day was reserved for the Water Park.

The moment had finally come! Athena was about to go down her first water slide. She was nervous but ran for the first slide she saw.

I felt equally nervous. What if she goes under the water? What if she hates it and it ruins the rest of our day? What if she gets hurt? (All irrational fears, but any mothers out there must understand. At least I hope they understand. She’ll always be my baby. I’m finally starting to understand what I put my poor mother through all these years. I’m so sorry, Mom.)

I didn’t project any of my nervousness on her. I smiled and encouraged her to go down the slide while I waited for her at the bottom.

Will you catch me, Mommy?

Of course, My Love! 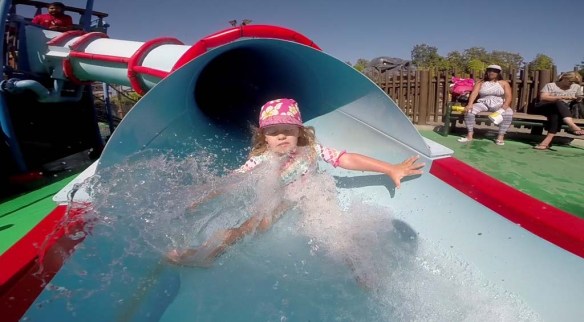 Wooosh! She was off. The water was in her face. I pulled her out at the bottom. 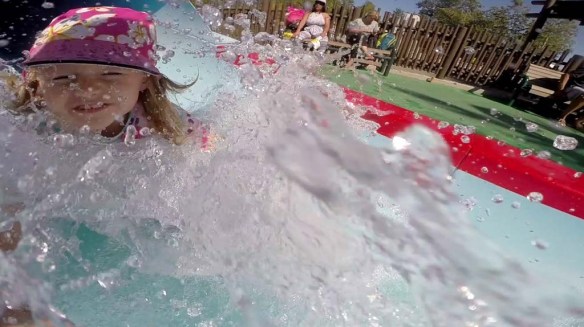 She loved it! She wanted to go again and again.

Where did my baby go? I was watching this brave little girl rush down the water slide and get washed in the face with waves and I realized she’s going to be just like me. I’m in trouble!

We played in the water until we were cold and soaked to the bone. It was almost 6 PM when we finally walked back to the hotel. Athena may be too young to have a bucket list, maybe I am as well, but we’re having a blast coming up with items and crossing them off as a family.

If you want to read more about our fun in Carlsbad, California, check out my other posts on Bucket List Publications Website.