When Darren and I first moved to California, I wanted to visit Santa Monica Pier before anything else. It is the end of Route 66 but the beginning of a new life for us. I had seen it on tv shows and movies but I never thought I would see it with my own eyes. When I did, it was as glorious as I had envisioned. Now, five years later, Athena had a similar experience at Santa Monica Pier. 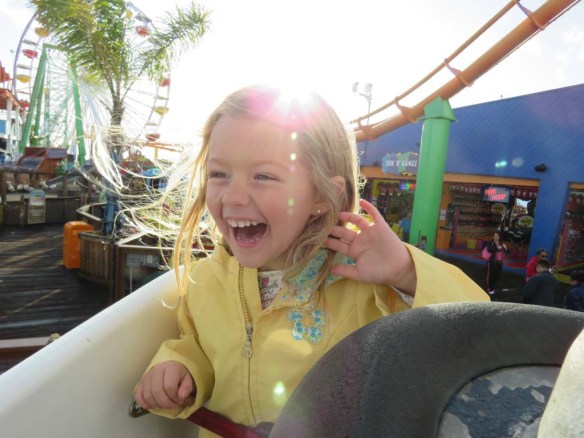 We got bracelets for the rides at Pacific Park located on Santa Monica Pier. Pacific Park is the West Coast’s only amusement park located on a pier. Millions of visitors each year enjoy all the rides, games, and fun you’d expect from one of Southern California’s leading attractions.

Ride after ride, Athena smiled with her entire face. She was filled with complete joy. We rode the Pacific Wheel first. The world’s only solar-powered Ferris wheel gives visitors a panoramic view of the Southern California coastline from more than 130 feet above the Santa Monica Pier. But I was the only visitor who got to see this view! Athena’s smile is always the best sight of my life.

Our next experience was on Inkie’s Air Lift. Featuring the combined movements of a Tea Cup ride and a hot-air Balloon race, I worried that Athena wouldn’t enjoy the spinning and lifting motions at the same time. I planned to hold the wheel to prevent any spinning but after one rotation, I could see that she loved it. She wanted to spin faster and faster and the more we turned, the bigger she smiled. Some days, I don’t feel like she looks like me, but when I bring her to an amusement park, it’s easy to see she’s my kid. I spun us round and round with pride.

We rode every ride that was possible for Athena and her excitement continued throughout the day.

We finished the day with one last ride on the Pacific Wheel, ending where we started.  At about 45 minutes away, we’ll be back to Santa Monica Pier again and again. Athena is at that glorious age where everything is beautiful and fun and she makes everything that way for me. 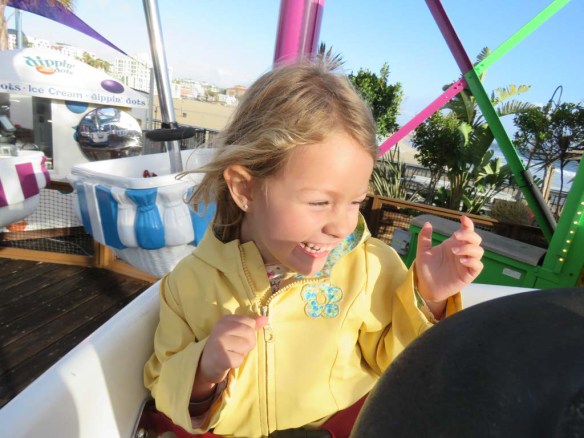 People always ask me why I travel so often with Athena when she won’t remember it anyway, but I will remember this day and she can look back at the photos and see the things that brought her joy as a child. If that’s not enough to make me want to show her the world, nothing is.