You have probably overpaid for some craft cocktail, been late waiting for some train on an A/C-less platform, and perhaps stepped on a few hundred roaches. However, whether you have months or a few days to explore New York City, there is no way you will be able to conquer even half of it even with your entire credit-card debt, permanent insomnia, and stolen moments of subway sleep.  From participating in early-morning karaoke to exploring the Statue of Liberty, here are five things you should absolutely include in your NYC tour bucket list.

Karaoke is either an activity you hate or love. With a multitude of songs, multi-colored strobe lights, a drink menu to get you drunk and another menu to cater for whatever your drunk self desires to eat, karaoke in NYC is neither for the faint hearted ror the meek of voice. Whether you are into Western-themed salons, rock-themed bars, or the European-style clubs, the Big Apple offers you plenty of karaoke venues, including Sing Sing Karaoke, Gagopa Karaoke, and Pulse Karaoke in Times Square. 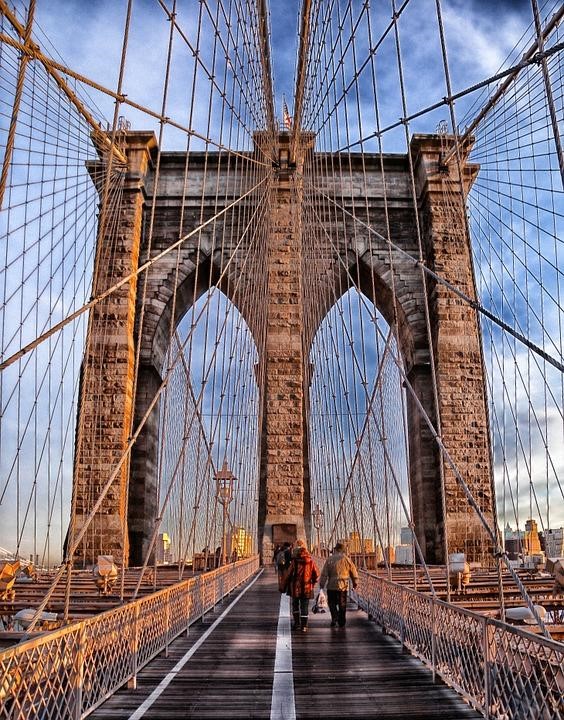 Of all the awesome things you should be doing in New York City, this is a favorite for many visitors and locals alike. The Brooklyn Bridge walk is a little more than a mile long, but it will take you about an hour due to the numerous stops for the splendid views and photographs. If you just have time for walking one way, make sure it’s from the Brooklyn side to Manhattan – spare enough time for exploring the DUMBO and the East River.

Meet a Surprise Celebrity at the Comedy Cellar

The Comedy Cellar is a famous Greenwich Village comedy club that offers you more than just laughs. It is also the destination for top New York talent to test out their new material, and the surprise celebrities include the likes of Jerry Seinfeld, Aziz Ansari, Dave Chappelle, and Jon Stewart. While you cannot schedule these events, you can confidently say that you have just experienced a true New Yorker moment when it occurs to you!

Check Out NYC from Above

While New York has numerous tall buildings, one way of getting a bird’s eye view of the splendor of the city is from the Top of The Rock’s viewing deck. The Empire State Building is another building where you can view the Big Apple from – and it’s better looking than The Rock. Plus, the Empire State Building is located in Midtown NYC, giving you a good view of many other tall buildings, as well as the beautiful Central Park – from these heights, you will truly appreciate the size of the city.

Another great viewpoint is Freedom Tower’s One Observation Deck. After paying your tributes at the 9/11 fountains, make your way to the Freedom Tower entrance. At the top, you will be treated to an epic entrance – with a surprise – and a great view of NYC and the Statue of Liberty – consider tour services from sources like TopView NYC website to visit these iconic landmarks.

New York is home to a host of food options from just about every culture in the world; however, when you go on an NYC food tour be warned that you will gain a few pounds in the process! Visit Katz Deli for a sandwich packed with meat, and remember to ask for cheese when making your order. Red Rooster is a Harlem gem offering you fancy style soul food, and it also happens to be one of the hippest Harlem restaurants and is a must-visit for anyone in New York.

Is New York on your bucket list? What are some of the other best of the best experiences in New York? Now that we’re back on the east coast, a return trip to New York is a must.