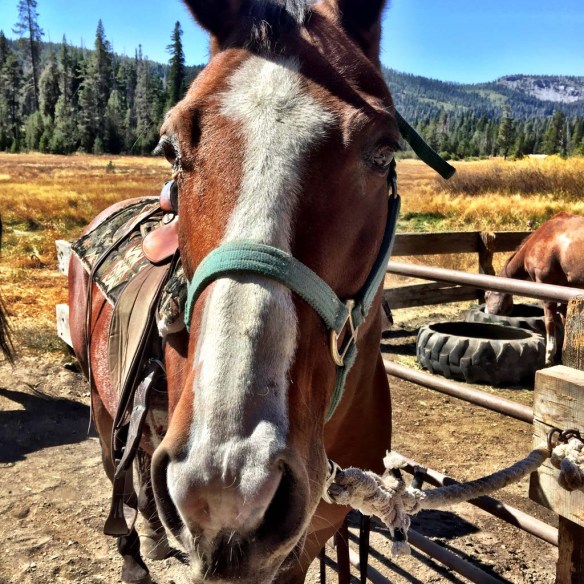 Last week during our northern California trip to Shasta Cascade area, we stayed in cabins, camped in tents, slept in a loft next to a river, hiked to mountain tops and deep valleys, explored caves, kayaked rivers, and had close encounters with birds and bats. There were tons of first time experiences and opportunities for adventure, but the best part of the trip was horseback riding at Drakesbad Guest Ranch. Athena rode on horses before but I have a feeling this is the one that she’ll remember.

We arrived at the ranch at noon. When we checked in, we asked about riding the horses. We were extremely disappointed to find out that Athena couldn’t ride with me or go on the long trail ride with the adults. She needed to go on a pony ride at 5 pm. The reason we wanted to stay at the ranch was for Athena to ride the horses. Even though we were discouraged, we still made the best of it. 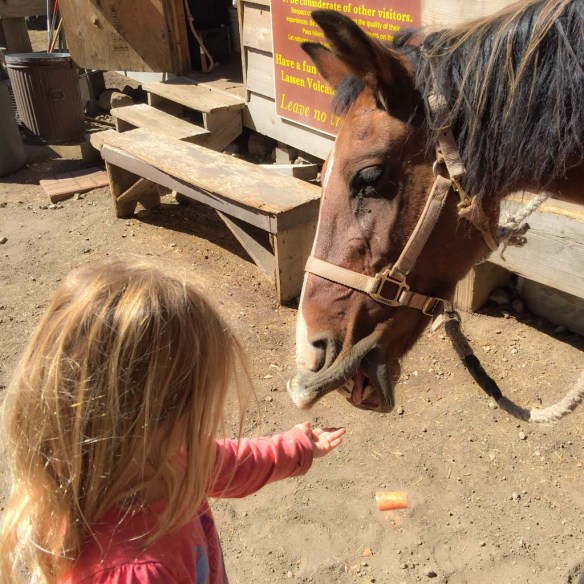 We were given a basket of carrots to feed the horses. Bravely, Athena put her carrot-filled hand under a horses mouth and allowed him to take the carrot from her open hand. I don’t remember being that calm around animals triple my size when I was four years old. I would think she’d be intimidated but she didn’t even hesitate. She fed pieces to every horse at the ranch and giggled and smiled with every encounter.

On the other side of the stables, there are hiking trails. We had time before our pony ride so we took the shortest trail, a little over three miles return, and made our way through the meadow. Athena loves to jump over rocks and lead the way through trails. She enjoys being outdoors regardless of what we are doing but being in nature is really her element. She’s always happiest when we’re in the wild.

It was time for her ride when we got back. 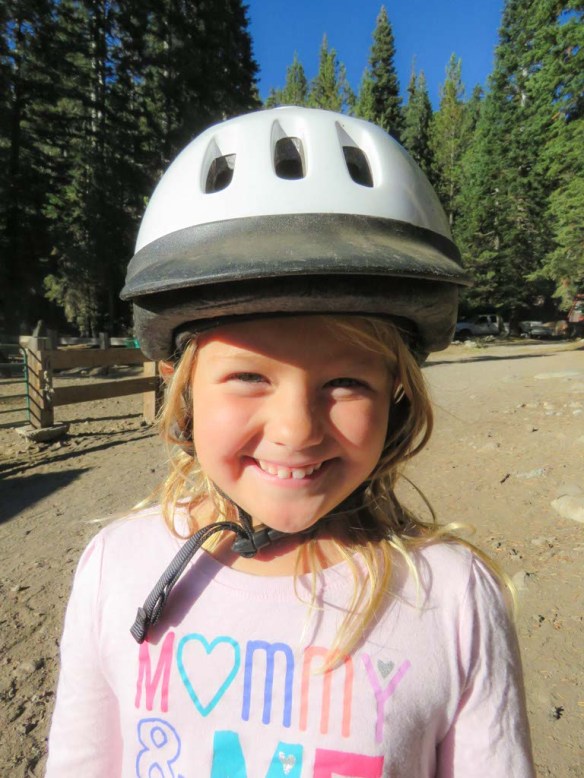 Janelle was our instructor. She helped Athena get ready by giving her a helmet and showing her where to stand to mount the horse. We expected a small pony to return with Janelle. Instead, it was one of the large horses. Our discouraged mood was already starting to change. 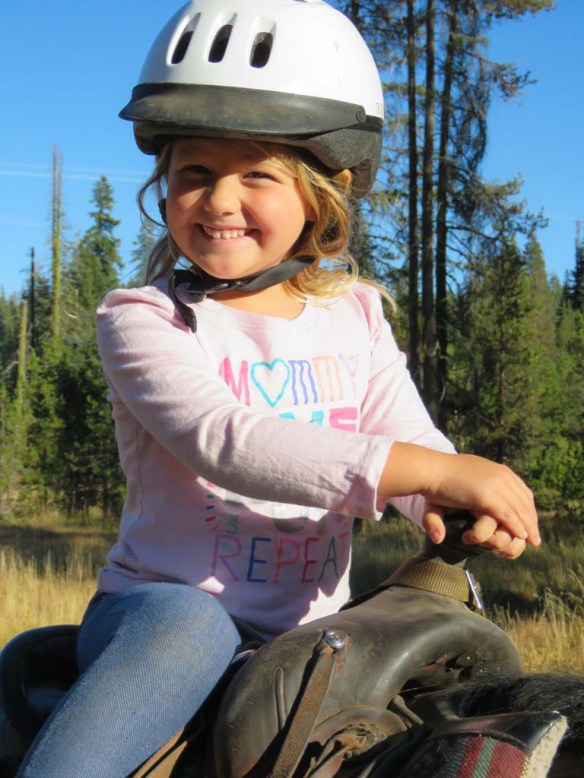 Athena mounted the horse and Janelle explained that we were taking the same path that we used for the hike. It had small bridges, a meadow, tall trees, and narrow paths. The ride would be almost an hour total. The best part was that Athena would be on the horse by herself. I should have asked at check-in and I could have avoided all the negativity. This was way better than what we anticipated.

Athena repeatedly thanked Janelle for the ride. She said, “this is the biggest horse ever. I’m so happy I get to ride him all by myself.”

When we returned, Athena hugged Janelle and told her it was the best part of her trip. I asked her what she liked so much about it and she said, “When the horse stepped down from the wooden bridges I felt like an adventurer. It was the best.”

She couldn’t stop talking about her horse experience. She asked me if I could take her to more horse ranches so she could keep riding by herself. When it was time to leave, she started to cry because she was going to miss Drakesbad Guest Ranch so much. As we drove down the dirt road back to pavement and phone service, she said, “Do you think we could live at the ranch? It’s my favorite place in the world.”

I never expected her to have such a connection with horses, but that’s one of the best parts of having unique experiences in new places. You never know what will grab a hold of your kids until they experience it for themselves.

9 thoughts on “Horsing Around at Drakesbad Guest Ranch”