Tonight’s experience at Longboat Key Club & Resort was a warm reminder of why I love to travel. Why? Because I drank my way through dinner as I got to know locals who have a membership at the club. Come along for my unedited version of Longboat Key Club.

When I arrived at Longboat Key Club & Resort this morning, I worried that it was more high end than my true liking. The staff were welcoming and the guests were friendly but everyone was dressed as if they just walked out of a magazine and I was by far the fattest person in the room. I never let that discourage me though. I’m well educated and can keep a conversation about politics, adventure, travel, and sports. I wondered if I’d spend the next two days alone with limited conversation, but I was shocked to meet the most friendly, laid-back people that I met in a long time.

I arrived to a delicious nut and fruit tray that would make anyone drool. Rather than testing it as soon as I arrived, I put it in the fridge. I knew after a few drinks I’d have more use for it later in the night.

I spent the day taking photos of the property and myself. It can be a challenge when I’m alone but I used the timer on my phone and made the most of it. Taking pictures of myself can get some weird glances but it’s never bothered me. I’m happy and confident in myself and always start a conversation with anyone that looks my way. Sometimes I see it as a challenge. Can I spark up a conversation with anyone of any age group and any race? With a child, a partner, and a lust for extreme adventure, I feel like I can fit in almost any category.

While on the beach, I took photos and swam. I carelessly left my camera and bag on the beach while I splashed in the waves. The waves were bigger than anticipated and I was tossed around like a piece of seaweed. Normally, if anyone was with me I wouldn’t let the fat fly like that but I didn’t know a single person on the beach so what did I care? 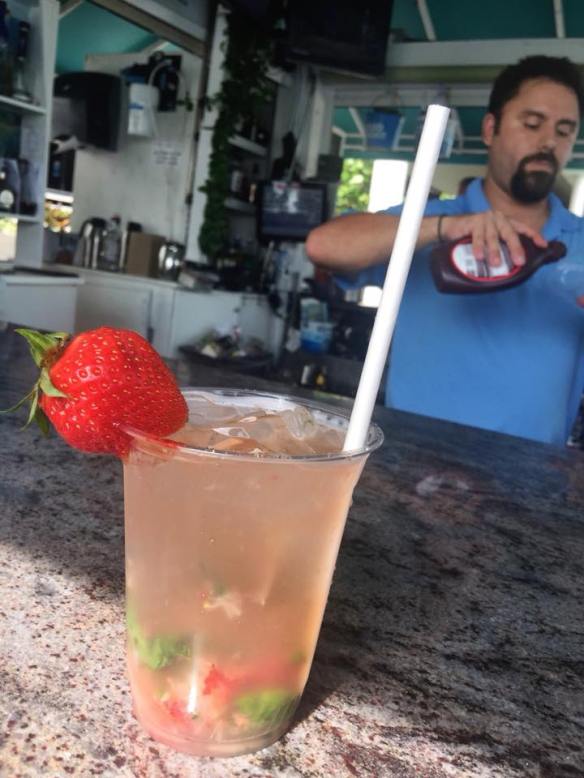 When I was finished on the beach, I made my way to the pool bar. The waiter, Joseph, kept pretty good conversation for almost an hour but I still felt a little lonely. A large group was there and I could tell that they were locals with a membership but I couldn’t casually work my way into their conversation.

Eventually, after four or five drinks, I heard one of the guys talking about a documentary on reintroducing wolves back into the environment and I’d watched the same documentary so I chimed in about beavers eventually building dams because of the flowing rivers and he knew exactly what I was talking about.

The conversation led from one thing to another and he introduced me to his wife. We spent the next two hours talking about everything from scuba diving to President Trump. It was such an engaging conversation that I didn’t want to leave.   Even when I had to pee, I held the course. I worried that if I got up to go to the bathroom, the conversation would drift off and I would end up back in the room at 7 pm with nothing to do but work and watch Shark Week on tv. (Not that I don’t love Shark Week but I think I’v e seen every episode in the last few days.)

When I finally returned to the room at 9 pm, I was drunk and hungry. (Enter the delicious tray now taking up residence in my fridge.)

I was staying along in the room so I took off my bathing suit and put on the comfy robe provided. I sat at the dining table in the robe and devoured the food tray and a can of coke as I texted and replied to emails.

It’s not the glorious evening of fine dining and dressing up that you’d expect at a four-diamond vacation experience but it was exactly what I wanted. Tomorrow I can relax at the spa, but drinking at the bar and chatting with locals was my version of perfection tonight.