California has been a magical dreamland of wonder. When I first moved here, I had visions of beaches and palm trees but I had no idea it was such an endless world of entertainment. Sure, I was aware that it was home to movie premieres and countless celebrities, but I didn’t realize that I would attend ballets, musicals, and concerts on a regular basis. One major entertainment event that reminded on my list all this time, though,  is Coachella. The Coachella Valley Music and Arts Festival is an annual music and arts festival held at the Empire Polo Club in Indio, California. From the best people watching in the world to world class art, Coachella offers numerous experiences to enjoy along with the music. So this year, I decided it was time to cross it off my list.  END_OF_DOCUMENT_TOKEN_TO_BE_REPLACED

If I ever leave this world alive

Flogging Molly toured in Moncton, NB a few years ago and I had the opportunity to meet them in person. It was most definitely a bucket list dream come true.

“The sun never shines on closed doors” so I interviewed Bob Schmidt on the Flogging Molly tour bus before “floating” off to the concert.

END_OF_DOCUMENT_TOKEN_TO_BE_REPLACED 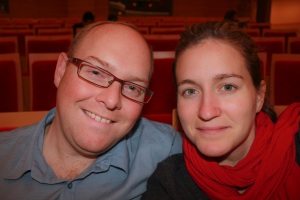 Last night, an over-flow of powerful emotions was erected inside of me as I entered the Segerstrom Center for the Arts and took part in the Pacific Chorale’s Christmas concert, Tis the Season! Pacific Chorale’s annual Tis the Season! concert features Pacific Chorale, the Southern California Children’s Chorus, and members of Pacific Symphony in the favorite selections from John Alexander’s years of holiday programs. To celebrate this anniversary year, John Alexander has chosen audience favorites from the last 40 years of Christmas concerts he has conducted, making this year’s concert one that evoked emotion and my fondest memories of Christmas. As I sat in the audience, I was transported back to my childhood and engulfed in the visual and auditory beauty that surrounded me. END_OF_DOCUMENT_TOKEN_TO_BE_REPLACED

An authentic gondola ride from a Sicilian at The Venetian, Las Vegas is a truly romantic experience. I only wish I had of recorded his Italian serenade to us. From the soothing sound of water lapping the sides of the gondola to the eloquent singing of the gondolier, we felt as if we had been transported to Italy.

END_OF_DOCUMENT_TOKEN_TO_BE_REPLACED

Flogging Molly’s Bob Schmidt and I in Moncton, NB, Canada.